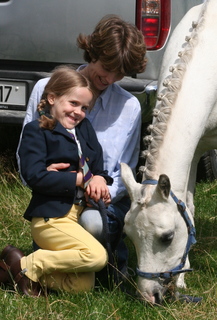 There is huge diversity in equestrian sport, a diversity that brings great strength and flexibility with an appropriate activity available for almost everyone. However the horse world is also weakened by a lack of unity. The different disciplines often put up barriers between themselves, the English and
Western riding worlds remain largely separate, and the racing world is often seen both from outside and within as a world apart.

If we worked together more we would be seen as one of the most desirable sports in the world. We could be more united because we are all linked by one common element that is integral to every one
of these activities…..the horse. We are all part of something very special because we are able to harness the power of a horse, a power that influences us as much mentally as physically. Horses are good for us and we need to all unite in shouting this message from the rooftops.

EQUINE ASSISTED LEARNING FOR ALL

When some people dismiss horse sports as elitist or brutal we should tell the stories of the weak and damaged in this society who are helped to heal in their thousands by an association with horses. Equine Assisted Learning (EAL) gives us without doubt some of the most powerful evidence for
the good that can be done for humans by interacting with a horse….and I believe that this positive effect is mirrored by the majority of people, whether less able or more able, in all equestrian sports. The extraordinary fact is that to benefit in this way we do not have to be on the back of a horse, just in close mental contact.

The benefit I am talking about is not a rush of blood to the head, a temporary adrenalin high produced by exhilaration and challenge. Instead I am talking about the fact that an association with horses tends to make us feel better and as a result feel better able to do more withour lives. To some this will be perceived as a tall story but in truth there are thousands of riders who know exactly what I am talking about, because they have experienced life both with without horses and know what effect a horse has had on them mentally. With a horse we can centaur ourselves and find not only more physical freedom but also more mental freedom. As Churchill said “There is something about the outside of a horse is good for the inside of a man.”

Dogs have similar positive effects on humans, as does swimming with dolphins, but horses are in a different league, in particular because of an extraordinary physical fluke that makes a horse suitable for man to ride? It is our great good fortune that a horse has a back and girth line so suited to carry a saddle, with the riders weight so closely aligned to the horse’s centre of mass. We are also so blessed with the willingness of horses to cooperate and work with us; and with their athletic ability and strength to jump huge fences, pull huge weights, and move most humans faster and further than they would be able to go on two legs. Not forgetting their vital historical role in both agriculture and war. “All our past has been borne on hisback, all our history is his industry.”

The truth is that there is something hard wired into humans that relishes movement, speed and athleticsm. We love Shakespeare’s famous words in Henry V because they ring so true…"When I bestride him, I soar, I am a hawk.” Horses are fundamentally beautiful in movement and the feel of a horse in movement is often close to flight and is inspiring. Even just their image is inspiring to many and there is no doubt that Pegasus is a magnificent image.

A few years ago I planned to use this phrase, Pegasus is a magnificent image, as the climax of a set piece demonstration to various dignitaries at Coleraine University. It was also being filmed for the main national evening news and the camera man and sound man were in place. Such an opportunity is rare and I was keen to create a very special moment worthy of this audience. Using a set up

fence and a talented horse and rider I planned they should go down to this huge oxer, with the time in the air being sufficient for me to intone “Pegasus is a magnificent image” with perfect timing and maximum effect.

The dress rehearsal went perfectly and I was full of confident anticipation. The demonstration itself went according to plan up to the time the rider jumped the placing fence. At that very moment a dog, belonging to one of the audience but shut out of the arena, pushed over a metal drum into the side of the arena. The horse jumped slightly sideways away from the sound and tripped and shortened his stride….with the result that as I said “Pegasus is a magnificent image”, with the full power the occasion deserved, one poor horse and rider crashed through my carefully constructed fence! Now, a long time later, I can laugh about it, but at the time there was nothing but a dreadful silence…. and I just knew that the organizers were making mental notes to remove the equestrian coaching course in future.

So I went on the offensive and made a presentation to the School of Sport shortly afterwards. In this presentation I showed why equestrian sports have huge added value in the workplace and society. By the end the decision was a no brainer for them and the equestrian course was welcomed the following year with open arms! Next week I will share with you what I said to them. ONWARDS! William

NEXT TIME....WE ARE PART OF SOMETHING VERY SPECIAL - Part 2

Comment by William Micklem on February 16, 2010 at 6:30am
Let's hope all horses meet their own 'Denise." William

Comment by Denise Colebrooke on February 15, 2010 at 10:02am
So well said. I love learning about other disciplines there is always something new to discover. The knowledge to be gained from horses and about horses seems infinite despite an association of decades. Communication with horses every day refreshes my sense of well-being and wipes my mind clean of any stresses or worries. The last check of the stables at night before bed does more to ensure peaceful sleep better than any remedy.

Comment by Geoffrey Pannell on February 12, 2010 at 3:55pm
Bravo Mr Micklem, My sentiments exactly!! There must be someting about this Aussie- Irish connection that puts us on the same wave length, kindred spirit's and all that lol.