Best of William Micklem - 6 - THE YOUNG WILL JUDGE THE OLD 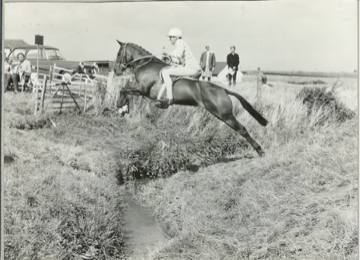 I remember the occasion well. It was the Fourburrow Pony Club camp in Cornwall, in the south west of England. I was 12 and a typical thin gangly kid. As you can see in the photograph above I was six foot tall on stick legs and all curled up on a 14.2 pony....my brilliant mare Charlie's Aunt. So what did my coach do? She took away my irons and made me ride and jump all morning with no stirrup irons, just like so many coaches have done before and since. She was especially confident about doing this because she had also taught my elder brother Charlie, who was able to ride the most slippery horses bareback with great ease.

I was in agony that evening in Pony Club camp, and the next day, with strained groin muscles…and now over 40 years later I continue to suffer on an almost daily basis with my right leg. Yes I should have had these injuries better treated over the years, but equally the coach in question should never have taken my stirrup irons away in the first place.

It was also not a good idea for my coach to assume something because of previous contact with my brother. Early on I learn that the word ‘ASSUME’ itself contains a very important message…break it up a little and you will see that if you assume things as a coach it will make an ASS of U and ME!

The young are generally wonderfully enthusiastic and willing to do what their coaches ask of them, but they will also remember those early days as clearly as any that follow and in time judge their early coaches. We won’t get everything right but this is why all coaches have a responsibility to keep studying and have the humility to ‘let a good idea give way to a better idea’. In particular we have a responsibility to progress ‘step by step’ through the beautiful progression of exercises that have been tried and tested and will lead to higher level riding, if the student has the opportunity and desire to do this….and all good coaches know that if confidence is in short supply, or there are other learning difficulties, it may have to be not just ‘step by step’ but instead ‘toe by toe’.

THROUGH THE EYES OF A HORSE

So do our horses also judge us? The answer I believe is a resounding YES. Yes, from the moment they have their first contact with human beings. As prey animals they have to learn quickly and they are genetically hard wired to learn all their early experiences very well. Of course the downside of this is that retraining or changing their initial ideas about humans is not easy and certainly time consuming.

THE RIGHT SUPPORTS IN PLACE

They will either continue to suffer, as they fail to fit in, or, if they are lucky, they just might just meet humans with the special skills and patience to dull their initial memories and judgements and give them a chance to lead useful working lives. Humans who don’t assume things, but treat each student as an individual with their own strengths, weaknesses and history. Humans prepared to progress toe by toe. Of course as well as horses there are damaged humans who also need this approach, and with this approach - and with their stirrup irons - extraordinary change and progress is possible. Happy days. William

NEXT TIME - Best of William Micklem - 7 - RIDE LIKE AN INTERNATIONAL RIDER...TODAY! The blog post that stayed in the 'most popular' list for a record number of weeks.

Comment by William Micklem on January 19, 2010 at 3:07pm
Shirley...thank goodness you lived to tell the tale and you see the positive in the situation...but others should read this as a very important cautionary tale...love a welcoming whinny...you have made a connection...William

Comment by Shirley on January 19, 2010 at 1:21pm
Great item William! And I enjoyed the many comments after.
I wish I'd read this post a few months earlier. Last August I thought the riding without stirrups idea sounded great to help develop a better balance. At 58 yrs. old on a great gelding that is not bomb proof (are any?) I made a very nice crash landing. I got up trying to convince myself that I was okay by repeating to myself "I am a football player". So with serious bruises all the way across my lower back /hiney and a mild bleeding of the liver, I decided it wasn't such a great idea for me. Cost me a bill at the emergency clinic, another at the hospital, then another at my family doctor and several appointments at the chiropractors. And, my progressing confidence took several steps backwards again. The good that came from this is my pleasure when my horse came and stood with me until someone led him to his stall and for several times after my fall when I went to see my guy he came running with a whinny. The whinnying is something he'd never done to me before. What wonderful creatures we have to enjoy as a great blessing. Comment by Christianna Capra on January 19, 2010 at 11:31am
Thanks for this posting William, you bring out so many rather obvious but I think much overlooked or unnoticed points that can make all the difference in the world. Thanks for your wisdom here, its very helpful. Still love the photo and the mare's dedication to you... :)

Comment by William Micklem on January 17, 2010 at 7:47am
Good interesting thoughts Jo...William

Comment by Jo on January 17, 2010 at 5:19am
Fascinating - even today, there seems to be the impression that if you are not suffering, you are not improving. Riding without stirrups is, in many cases, beneficial but, as you say, William, if you are gripping to maintain balance, much of the benefit is lost immediately. Even walking without stirrups has the effect of "lengthening" the legs and making the stirrup length feel shorter (more secure?) when retaken. Bouncing is to be avoided at all costs, surely - for the horse and rider? Holding lightly with one hand onto the pommel to "pull" oneself deeper into the saddle is very effective and stops the bounce - tense- bounce cycle. This is a very useful debate - we should be asking ourselves what are the benefits of riding without stirrups. The idea of improving balance is probably false. This goes back to the misconception that riding with stirrups is akin to riding with stabilisers on a bicycle - for beginners and that accomplished riders should be able to do without stirrups all that they can with. I, too, rode quite a bit bareback as a child - dare I mention the quieter movement of (some) ponies v horses. And I'm sure there was quite a bit of cantering - a smoother gait!

The insight into the regime at Saumur is really interesting, Jean-Luc.

Comment by Denise Colebrooke on January 16, 2010 at 6:55am
Indeed - personal experience forms and shapes our experience and vive la difference, it makes for healthy debate and learning experience. I love the idea of a light trap I think that would suit me fine these days - Thanks for such great blogs. Denise

Comment by William Micklem on January 16, 2010 at 6:23am
Hi Denise...it comes back to the fact that everything has advantages and disadvantages...despite all the words about the harm saddles do the invention of the saddle had the biggest positive effect on horses...riding bareback with all the riders weight acting in one small area does not make it easy on the horse, whereas a saddle spreads the load and in days of old allowed much greater distances to be travelled...hence Ghengis Khan and the truly extraordinary endurance feats of western riders....of course if the ground is suitable and you want to travel as far as possible as quickly as possible with one horse you would do it in a light trap! William

Comment by William Micklem on January 16, 2010 at 4:44am
Jean Luc...thank you so much for taking the time to write in support...and such a terrific example...inch by inch life's a cinch, yard by yard life is hard. William