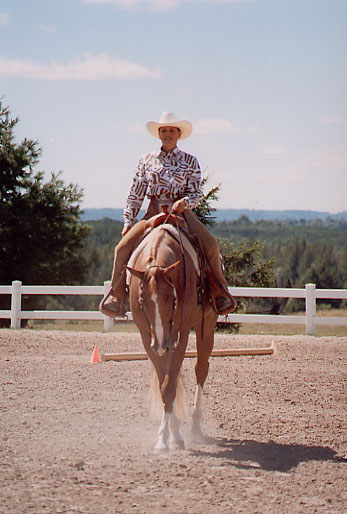 People often tell me that their horse loves to work, loves to jump, loves to show…From what I know about horses, I’m not so sure. Equitation scientists looked into the matter…

Imagine a conversation between you and your horse, if horses could talk.

You: Good morning Spunky. Ready for a ride?
Spunky: Not really.
You: Oh come on. Don’t you want to go out and work some dressage patterns? How about some trail riding, or maybe some jumping?
Spunky: Nope. Pretty happy right here with my buddies, but thanks for offering!

No, we’re not about to tell you that researchers have found a way to make horses talk. But if they could, this is the kind of thing horses might say. European equitation scientists recently concluded that, when given the choice, horses prefer not to work at all; in fact, it appears they'd rather be back in their resting place with their food and equine pals.

“For a social, prey animal, it’s not surprising that horses will generally choose feeding and social contact over locomotion,” said Uta König von Borstel, PhD, researcher at the University of Göttingen in Germany where they created a study in which horses were given the choice of more or less work….

“Results from the study suggest that horses prefer exiting the riding arena rather than being ridden at all,” she said.

Previous research has also suggested that horses will avoid any extra physical exercise and jumping when given the choice, she added. In fact, one study showed that they would rather be in the stall than in the paddock for turnout…

Incidental behavioral observations during the study also revealed that the horses in the study perceived riding—and especially mounting—as uncomfortable, she added.

Even so, good riding (which takes into consideration the horse’s physical health) should not be considered a threat to equine welfare, König von Borstel said. Even if asking a horse to do something it doesn’t want to might seem contrary to its welfare, being a riding horse is good for its welfare in the long term, she said.

“The very vast majority of humans won’t keep horses only to keep them as a pet on pasture,” she said. “So the decision, then, is between having: (1) horses whose welfare might be slightly compromised for an hour or so per day by us riding them, or (2) having, in the long run, very few or no horses altogether, as we will have no ‘use’ for them and they are too expensive (for most people) to be kept as pets.”

The study, "Horses' behavior and heart rate in a preference test for shorter a...was published in the Journal of Veterinary Behavior: Clinical Applications and Research

Interesting article!  I leave the gate open between my horse's living space and my arena for my liberty training sessions.  In my experience horses do not enjoy "work", but they will choose to interact and participate in schooling sessions of varying difficulty if it benefits them.  This is a difficult subject to research though because it depends heavily on the horse and on their past experiences working.

All three of my horses volunteer to come in the ring for training sessions, however they leave at different times.  One of my horses leaves the ring as soon as the sessions start to take on physical effort (she's elderly), the 2nd youngest stays as long as she's having fun or receiving the occasional treat reward.  My youngest mare has the strongest bond to me and will stay doing all sorts of physical activities until I kick her out of the ring!  She often refuses to leave and I have to lead her out.  She will also stay if I sit down on a barrel and do nothing.

I notice that once I bring out the saddle they ALL exist the ring.  Ha ha.

As for the stall versus the paddock I have an open barn and at certain parts of the day, certainly the girls prefer the stall and at other times they are out happily foraging in the field.  And again, my 26 year old mare prefers the barn more often, but the two youngsters only go in the barn for naps.

In terms of just plain exercise, I would agree that horses are like (most) humans. However, I think many enjoy the social interaction with people. Otherwise, why come to the gate?

Since it is instinct for a horse to conserve energy for important things like eating and procreation, it makes total sense that a horse would prefer to not exert itself under saddle. I find it hard to believe though that a horse would ever prefer to be confined in a stall versus turned out in a paddock! I suspect that the methodology of that particular study is seriously flawed ...