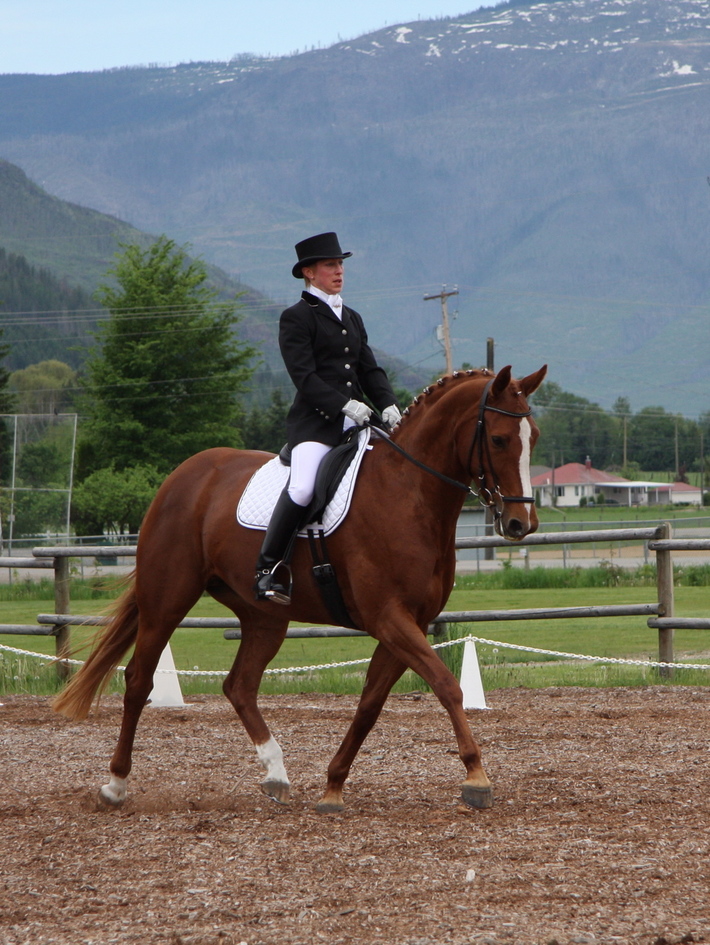 Do you have any pets?
3 Airedale Terriers

She's now (fall of 2009) finished her Third Level Medal, and started on the Fourth Level Medal. We had a short season due to my wrist and back injuries this year, but she managed to pull the scores anyway. She won her Fourth Level class (first ever) at the last show this fall and won the Division as well. She was the Reserve Champion High Score horse for the Southern Interior Dressage Association, reserve to her 1/2 sister and stablemate, Whimsical, who won the award for 2009!

My name is Gary Glaser and I am the mounted commander of the 9th New York Cavalry. We are located in the Niagara, Hamilton area but have members across Southern Ontario. Our members are both mounted and diss-mounted troopers. The Ninth New York Cavalry has been reactivated by a group of living historians and civil war enthusiasts interested in the portrayal of the life of the Federal Horse Soldier. As a group, we participate in living history encampments, re-enactments, and giving informative lectures throughout the year in both Ontario and the U.S.

To see more of what we do as a hobby please go to these two You tub site, this first one is a large  event that unfortunately none of our members were participating in  but do know most of the riders- it was held in Gettysburg, PA http://www.youtube.com/watch?v=PBCgFdTWLx4.

This next one is a small event held in Canada at Upper Canada village, all riders are members of the 9th NY Cavalry and you will notice that I ride a Stander bred cross: http://www.youtube.com/watch?v=BCx3Xkn9Wuc

If you have any question please do not hesitate to ask. This hobby is family friendly, and a great way to spend a weekend with you horse.

I finally have some good horses I've bred over the years and still have my westphallian stallion, Trojan, who is by Rio Negro. And now that I am finally in my old age in a position to ride, and I sold my ML place, and my sons are okay, I am ready to do some riding before I'm too old. I have a good horse trailer and truck and am looking at hauling into the okanagan to attend some clinics this year. Do you come to Castlegar or area to do clinics, Jan? The horsey community here is very scattered and I have not found any means of connection other than than the old timers I've known for years. So I don't know what is happening and google searches haven't resulted in anything.

Anyway, let me know what your schedule is, and if you come down here. Great to hear from you,Jan, and give my love to your mom and Phil. Tanya

I was thinking the same of you a few weeks ago and wondering how everyone is doing, and your mom and Phil. That is great about KC in engineering - do you know what area she will lean towards? civil? mechanical? electrical? I know that the electrical field is wide open - we have been trying to hire an electrical engineer for the past 3 years at AMEC in Trail, where I work for the past 5 years and we can't find anyone. Good for KC. Where will she be interested in working?

My son Dave married his long-time girlfriend, Donna, in 2007 and in November they gifted me with my first grandchild, Dlllon Andrew. He is just beautiful. Dave and Donna moved back here to Castlegar also two years ago as he could not find work in Kamloops anymore and it's a good thing he did sell his house also when he did as the market has fallen through the floor now with no work in that area. Dave now works at Teck Metals in Trail as an electrician.

Glen also moved back here a year and a half ago and had his 3rd back surgery and is now a junior electrical designer at AMEC.

And I sold my place in Monte Lake last spring when my tenants skipped on  my the fall before and left a disaster. I spent every weekend for 6 months driving back and forth cleaning and trying to decide whether to keep it or not. But finally, I sold, as my sons are both here and I have a good job and make good money finally. And with that money I bought another place in Castlegar that is just over 2 acres but all flat and useable and has a beautiful huge home where I can hang all my art and photography and entertain in my old age!

Hi Jan, Merry Cristmas to you, Well! Us Irish are hardy riders in wind & rain but add snow & ice in Westport, Co Mayo, and hunting is cancelled, we the riders, go into meltdown and cabin fever. Horses have sent us post card from their skiing holiday! What do you guys do to cope with frozen arenas?

Thanks for the info Jan!  WOW - it looks really good and very much like what I've been searching for.  We'll see about getting it in Idaho!

Patti at OMEGA ALPHA said…
Your very welcome Jan, my summer has been so insane that I am just getting to your note now.
If you ever need product advice please email me at www.omegaalpha.ca
I hope the products worked well for you.

All. The best
Patti

Meghan Rainey said…
well i am not in love with him.. adn i have plans for my future and he is supportive of them which is hard to find a city boy that likes horses and i do try to ride lots but rite now with the heat is hard.. but im trying to sample the world but its nice to have a guy there behind u to help u every once in a while... i mean if i really thought bou tit maybe i will stick to horses... they are so much easier to please and be round and u dont have to look good for them! plus no back talking and complaining when u r grumpy...

Jennifer Lamm said…
Thanks again Jan. I don't really give him sugar or butter creams... I just noticed that he likes them.. I'm pretty boring... he eats good hay and a few supplements and hardley any butter creams.... he like marshmallows that I had left over from Christmas... I'm sort of against the treats really but realized that they made me more confident.. it's like I have something he wants and I make him work for them... even if working to me is just listening and doing what I ask for now.... ":)

Jennifer Lamm said…
Thanks Jan.... at this point with Oliver I do not encourage him eating out of my hand..... so we go to a feeder instead.... he loves butter creams..... do you think horses get cavities? Is that a dumb question? Getting the vet near him to fix his teeth is a whole other issue don't you think? LOL.. thanks for helping me and cheering me up..... why does this horse affect my moods so much, ugh????? (I'm smiling as I say this.... )