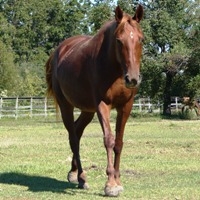 We cannot always see the light at the end of the tunnel; especially on those days when life has dealt us a blow and we are smack dab in the abyss of that dark moment.

I was involved in a freak riding accident once that, unfortunately, claimed the horse's life. Though I was unhurt physically, I was left devastated and emotionally shattered for a while. I recall lying in bed…

Habitat for Horses Adoptable horse of the Week