The Woman Who Cheated with Horses.

I like to hear Horse Husbands whine as much as the next person.

The Oakley Diaries - 16: Waltzing with Horses

I have associated Classical music with riding, ever since my first teacher used to play records during classes to help illustrate and teach rhythm.

What I've found is that horses also enjoy music, particularly classical European music, but really anything that has a good, lively melody; music without too heavy a beat, with a pleasant melody, and with a consistent tone, i.e. no changes between very quiet parts and very loud parts, works well, no matter what genre. Very quiet music…

MY beautiful Love of My Life ShyLa My Arabian Mare

I alway wanted a Horse So 10 years ago I got her she was 6 Months old . soon as I seen her eyes I new then she would be called ShyLa well even Being
Disbutley I could have her But I have a hard time staying on not because of her But I have bad Blance. And always had it she loves to ride I ride her in the rings but never. Went on trails I am hopping to fine others to ride her she loves to please you sweet as candy she is at a farm in Newton
I would prey I fine others to help me get her… Continue

Your Horse Has Ulcers

I don’t usually say it that bluntly but I wanted to get your attention. I need to make a payment on a debt. Usually I start with the term sour stomach. No one likes to hear ulcers because it opens the flood gates of guilt, blame and angst. Not to mention the…

The Who, What, When, Where, Why, and How of Horsemanship

Being this is a Blog about Communication. I thought it would be wise to write about this topic. After all, any good journalist who is writing about something will ask and answer all of these questions in order to communicate their understanding to the best of their ability. So I started pondering on the Who, What, When, Where, Why, and How of Horsemanship. All simple questions we need to ask and have the answer to before moving on to the next part. Its also important for us…

As many of ya’ll know, I have a three year old son named Reed.  As many of you also know, I have no prior experience raising children.  So basically, I have no clue as to what I am doing.  I try to apply natural horsemanship principles and techniques whenever possible, but as with my dogs, I am just not as disciplined with him as I am with my horses.  I find myself doing crazy things that I used to see other crazy parents do before I had Reed. Then, I thought that they were crazy.  Now I…

It's been a crazy week around here.  Havoc got his very first set of front shoes ever.  The smoke is different when it's billowing out between *your* front legs, apparently.  We have an excellent farrier, and Havoc actually mostly took it like man!  Not a damned thing when the nails went in.  I am sure may people just think that my boy came out being a solid citizen, but there was quite a bit of work that has gone into that kid.  I whacked his feet with a hoof pick since he was a baby.  He's…

Respect is a much needed component of communication. If you have ever had a conversation with someone who doesn't have any respect for you, or you may not have had much respect for them. You can compare this to a conversation you had with someone where both parties respect each other greatly and you can clearly see the point I'm trying to make. But the line for respect and disrespect is one that is not very clear.

What exactly is respect or to be…

When I first mounted a pony in Chile  57 years ago I was NEVER invited to consider the horse.  At most there was a small consideration for the horse’s mouth, but in 99.999% of the cases it was assumed that the horse had earned whatever abuse it had to suffer.  I also ran into the same assumptions in Uruguay, and in the USA when I returned to this country in 1963.  I found this assumption in riders, riding stables, instructors and trainers, both in person and from books and…

This year our Valentine message is from Edgar Rice Burro. No, don’t be silly. Of course he doesn’t take over my studio and type his profound and uplifting messages with his hooves. That would be impossible for him to do and you’d be crazy to believe it.…

Hi There, This is my first time blogging on Barnmice. Wondering if anyone in Ontario , or in North America has had a horse suffering from mycotoxin symptoms and what supplement you used to help with them. Thanks

Not really voluntarily, I have to say, more of a scooty thing.  Alas, I was not there, I was in Montreal where I have been for three weeks.

At any rate, my trainer had another trainer out who we sometimes put on the new kids because his balance is perfect and he gives them confidence... plus, he doesn't care what they do and he sticks like glue... must be the long legs.  For Havoc, he needs to know the people that are doing things with him, so we decided Jen on the ground was more… 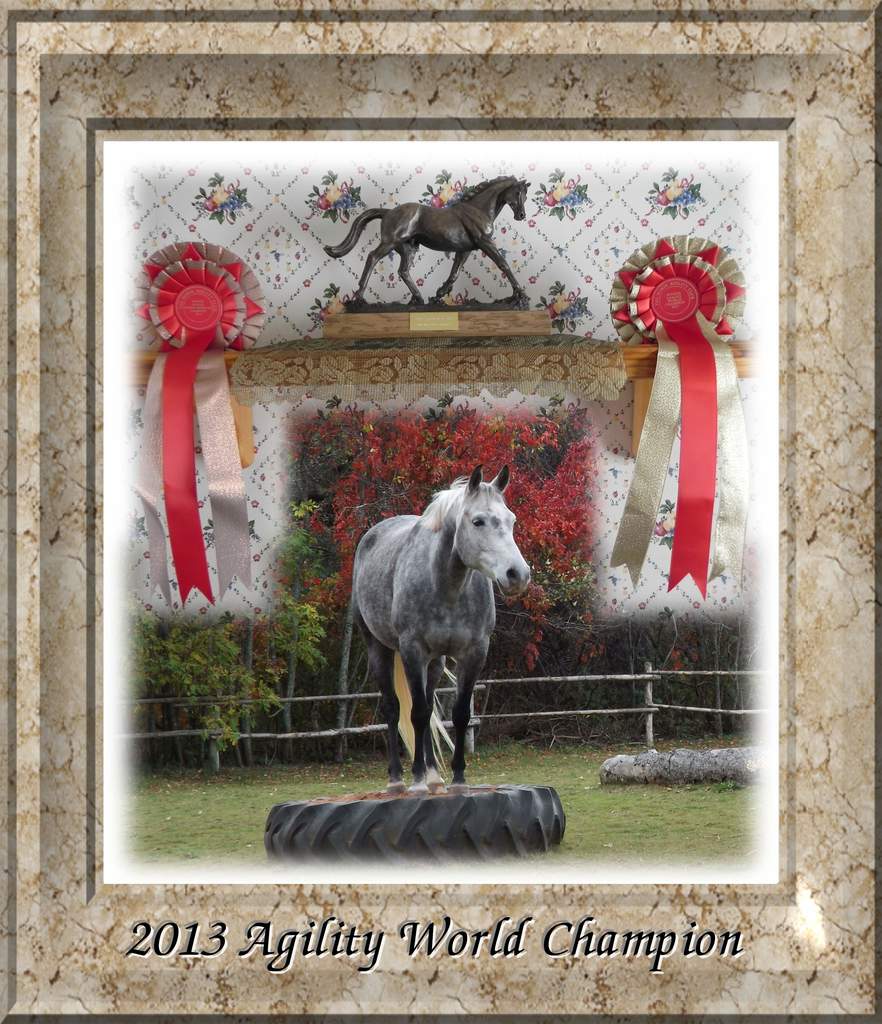 The winter weather is not helping my riding at all.

Wednesday morning it was raining, of course, but luckily Debbie was willing to give me my lesson on Thursday.  On Thursday morning she called me worried about the super sloppy ring and the possibility of ice, but she agreed to giving me a lesson when I told her that I was not up to much beyond the walk and that I was not physically able to do anything more ambitious than a slow sitting trot.  Then, with not…

Most of us read the training books and do the best we can to apply them in the saddle. We all think we define those words the same way, but we don’t all get great results. 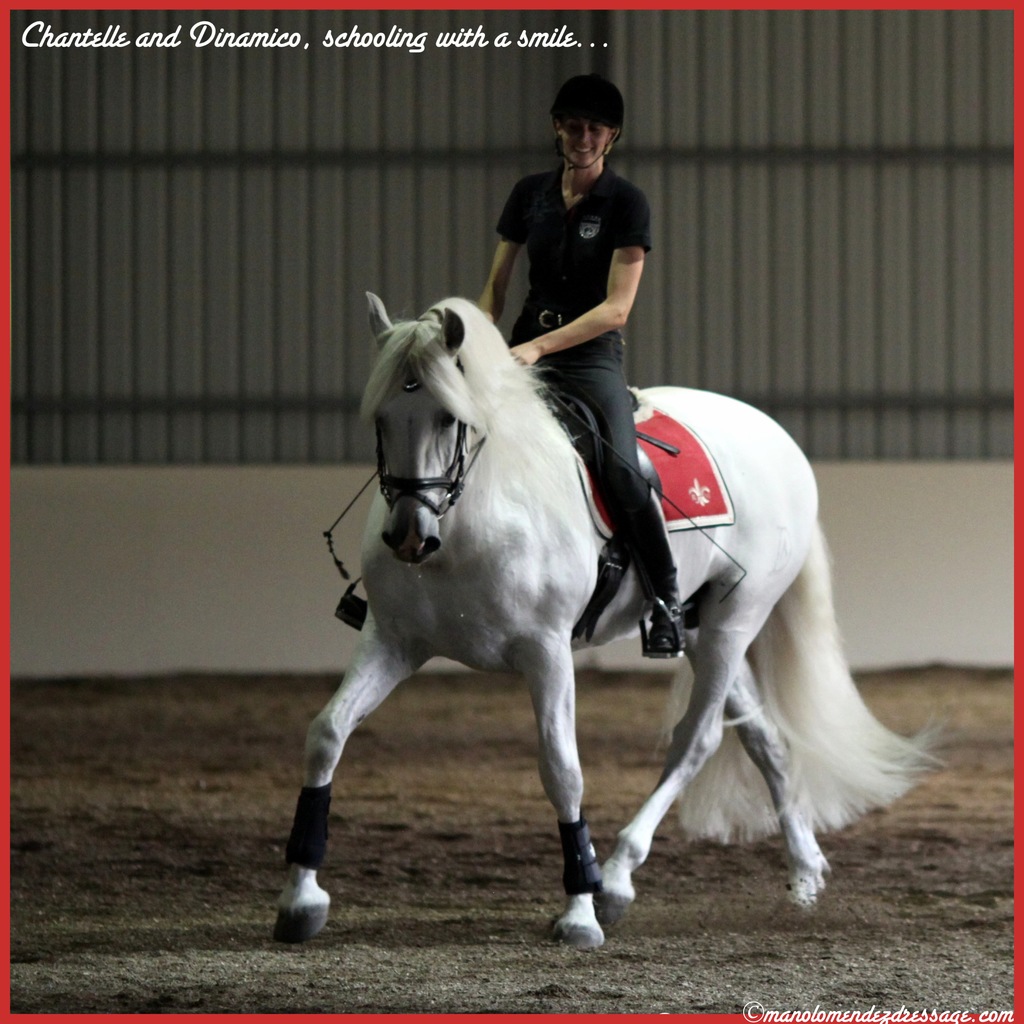 Relax. Breath. Smile for your horse. It will make your body softer and your horse more beautiful. Smile.

Are you thinking of getting your first horse, or your first horse in many years? Or are you a coach, trainer, breeder or rescue centre manager who wants to support your clients as they become more knowledgeable about horse ownership?  If so, this newly published book may be helpful.
It is written by Alice MacGillivray, who bought her first horse a few years ago in her 50s. She spent a long time preparing and immersed herself in learning through self-board arrangements, reading,…
Continue In his observations of the horse and rider, Manolo Mendez ‘hits the nail on the head’ with accuracy, intuitive awareness and in doing so, demonstrates his keen horse sense and deep…
Continue