Mick Elevates at the Trot Again

Not being content with Mick’s trot I made yet another change to my padding system, this week I put the Corrector UNDER the wool saddle blanket I had adapted instead of on top of the saddle blanket.  To recap my experiences so far--with triple fold woolen Western saddle blanket Mick gave me a non-banging sitting trot but he would not move his forehand freely; with a double fold wool blanket with the Corrector between the folds Mick still gave me a sittable sitting…

The Day of the Dead: Barn Version.

You’d think that the first snow/death-to-flies celebration would cheer me up. But no, days are shorter now and I’m haunted by summers end. Come to think of it, there isn’t much autumn left either. It’s the fall-back time change next week, that will mean night…

I have a favour to ask.... anyone who has facebook, it would mean the world to me if you could "LIKE" this photo of PACO!!  I would LOVE to have a painting done by Debbie Goldring of him as he means A LOT to me!

Are Your Finances Affecting You in the Tack?

For more information on the importance of your lower abdomen when riding, check out this…

…..The Rest of the Story

I meant to finish this story over a month (or two) ago, but time got away from me.  That happens routinely to me.  Part of the reason for that is I have NO free time.  I am either traveling to teach, trying to spend time with my horses or chasing things- like Reed or Scout.  Yesterday, I ended up chasing Scout through the Wagener High School hallway with the ROTC trailing…

Starting A Horse With a Foundation of Liberty - Kali's Story 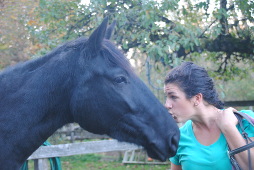 Last week Alex had her first ride on her three year old filly, Kalipso. Yesterday they went for their first trail ride down the trans Canada trail! Kali was calm and easy to handle every time. Her first rides have been completely solid and stress free. With any green horse you want them calm, but Kali is over 16 hands and as a big baby, it's vital that the situation is safe…

What do you think when you see this photo?

Do you notice that sweet S-curve in his tail? It’s the sure sign of a relaxed back on a forward, soft horse. This walk speaks volumes about his rider, too. What a lovely sight.…

A Tiny Bit of Progress With Mick's Sitting Trot

This was a very tiring week for me, yesterday I just could not get up enough energy to write my blog since it was the first day all week I got some down-time and all I could do was just sit and do nothing.  At least I made some progress with Mick this week!

One reason I was so tired is that I spent days cutting down one of my wool Western saddle blankets and adapting it to use it with the Corrector.  I sewed, and sewed some more, tried it on Mia (at least she did not…

It was innocent. They were looking for companionship, that’s all. Each had suffered a loss and they were drifting a bit, hoping to find a friend. Nobody said anything about falling in love.

Sumo came to Infinity Farm as a kid with his twin…

We welcome new horse, Indy, to the farm! 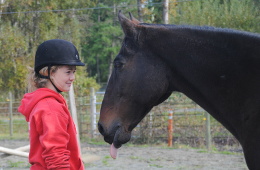 Sound the trumpets! We have a new horse at the farm and he's quite a character. He likes to lick people like a dog and is very fond of people in general. Indy is a joy to interact with. My property is perimeter fenced and when it's time to bring the horses in off my pastures, I just open the gate and they all run to their separate grain eating areas. The first day I called…

Pat Sullivan in Solvang, California has a very nice Trakehner stallion, with excellent bloodlines, Krusader crosses well with Arabians as well as other breeds.  His breeding fee is private treaty:

So I could wear my FITS deerskin paneled breeches.  This was good because I totally gave up on using double fold Western saddle blankets with the Stubben Siegfried.  So I put my Corrector back in its “sock”, apologized to the horses for any anxiety caused by the saddle blankets, and I suffered an immediate deterioration of my lower leg.  Now is the time for Arts and Crafts with Mia‘s saddle blanket!

Sunday I rode Cider in the EZ-Fit treeless saddle, and since I could… 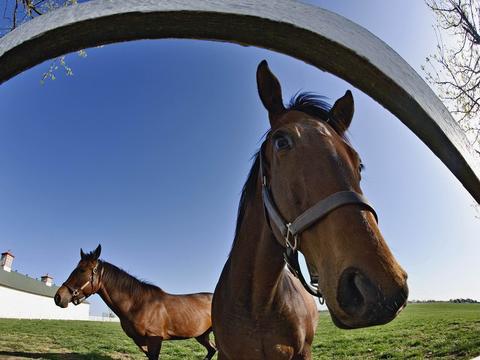 Why do horses do what they do and people do what they do? And why does the show ring seem to magnify those emotions and reactions? Brain freezes, butterflies and blow-ups…all part of the completive experience.

When we, as riders, understanding the science of how horses view their world, it helps to nip mishaps in the bud. As a prey animal a horse feels…

Think of riding as a conversation.

The first challenge is that we don’t all speak English. And it isn’t only the horse I’m referring to. Humans use language, but we define words differently, and sometimes, we may not be perfectly honest, even with ourselves. (I know, hard to believe.) We might say yes when we mean no. Insecurity might create a mood swing…

Putting the Cart After the Horse

All photos except interior of Tralee by:  Heather Clemenceau