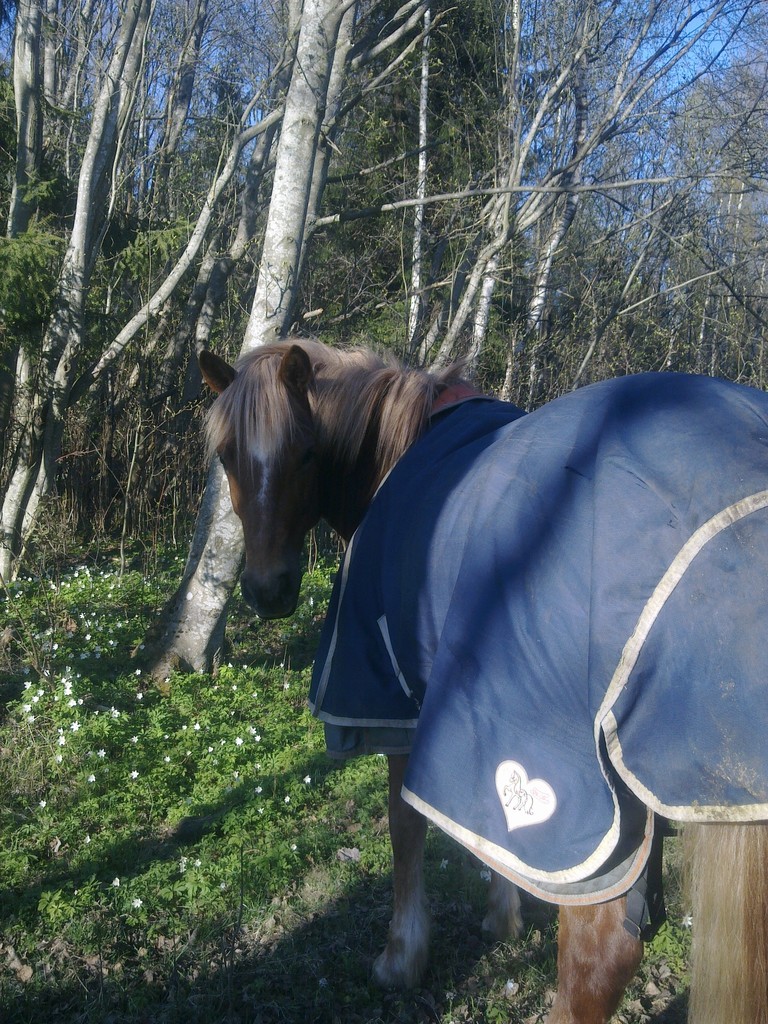 The plan for the day was to practice her driving skills. I put the harness on, and the long reins and we started traning. After warming up for about 20 minutes on the grass we started climbing everything in sight. The piles of dirt, sand, between trees and over brooks and in/out of ponds. She was doing so good and I was really really proud of her. I connected the poles and were ready to connect the weights. That's when it happend... 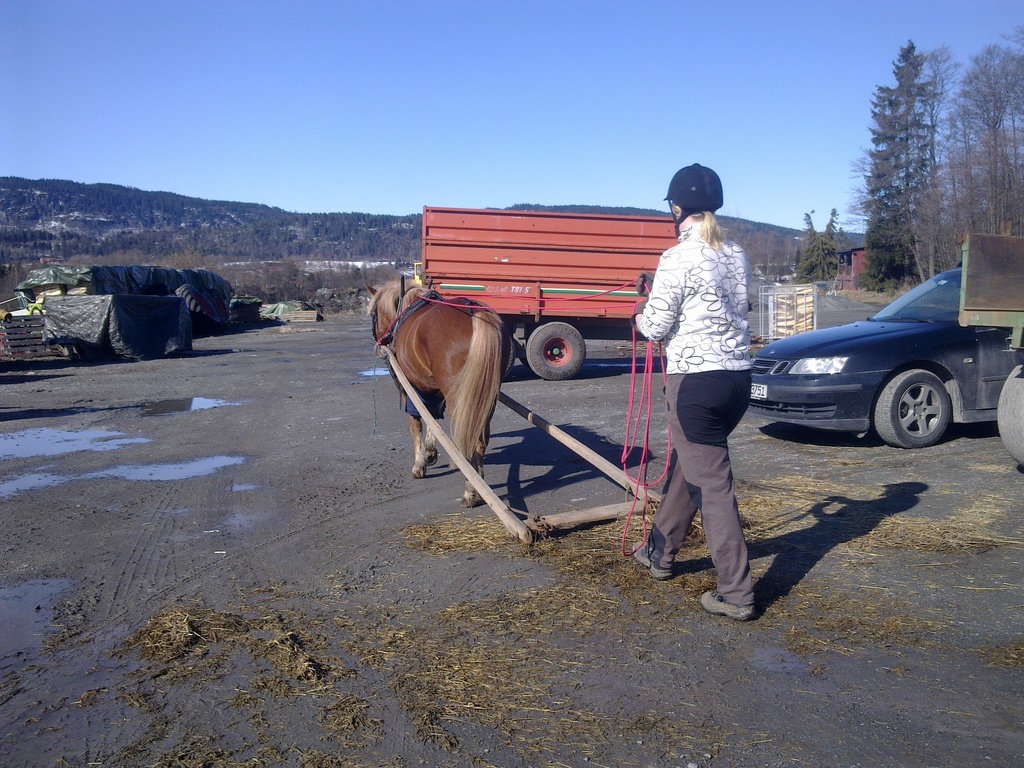 (she's done this a million times before, this was one of the other times)

The Pony flipped out, as did I, but i reacted on pure instinct. I pulled one rein so she turned towards me, I got a hold of the rein right besides her head as she spun into oblivion. She didn't know were she was, who she was or what was happening. One of her legs got over one of the poles and all she could think about was how to get them away from her. We spun around one way, then the other, I screamed, shouted, waved and even tried to smack her out of it but nothing seemed to work. I finally managed to loosen one of the poles but I couldn't ge to the other side of her so the other one was still hanging on. She was so scared.

There were two thoughts in my mind, number one was to NOT LET HER GO! whatever happened I would not let go of that rein. She would have killed herself. The other one was to get her loose. Suddenly she jumped to the side and the poles flipped over, meaning they were headed straight for me. I would die before I let go of the rein, that was the only hope of her getting out of this with just mild injuries. I would NOT loose another horse!

I screamed as the poles hit me over the shoulder and arm, it hurt so bad! and I was on my way to fall when the pony just stopped. She was back, she must have understood I was getting hurt and she snapped out of it. I got my balance back, and manage to loosen the harness. It slammed to the ground as i pulled her out of the chaos that was of poles, dirt, reins and the harness that had twisted and tangled. I got her to the barn and managed to reach someone who could help me. She had hurt her hind leg pretty bad and was really stressed out.

I tied her up, the ones who helped me called the vet and I got a chance to sit down. The tears just came streaming down my face, I was scared, sad, disappointed and angry, all at the same time. Everything we had worked so hard for, all the hours, all the energy, Everything was just gone in a spilt second. Because of two stupid helicopters.

The vet came, drugged her, fixed her up and told me what do. It's gonna take 3-5 weeks before she can be put back to full work. We got away this time. With only bruises, scratches and broken hearts to show for it. But that is a small price to pay for the life of my beloved little red angel. 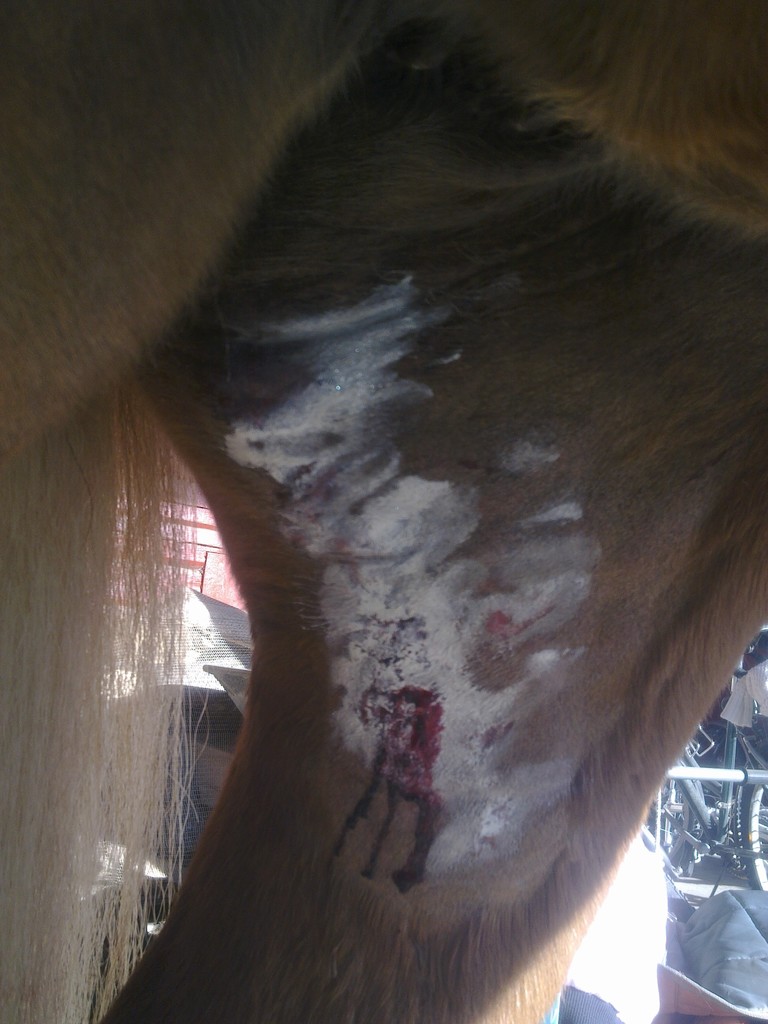 (The leg is really swollen, it is really sore, but she will be fine again, mentally)

Comment by Nicola Barnes on May 15, 2010 at 8:36am
U must've taken it pretty well. Good job! She must trust u quite a lot 4 just standing still in a situation like that! R u ok?

Comment by Deborah Hopkins on May 10, 2010 at 11:01am
Thanks for sharing your story Hannah. Sounds like you did everything you could in the crisis of the moment. Sounds like you and your adorable pony will work through the injuries and trauma, and be
closer and stronger for it. Don't let anything hold you back!

Comment by Alaina M. on May 8, 2010 at 9:10pm
Ouch! Sorry to hear about tough times. But you did everything you could, and she's a lucky pony to have someone who cares so much for her safety. :) As you said, she will get better eventually. You didn't mention your arm - hopefully you're okay yourself!?

Comment by Jackie Cochran on May 8, 2010 at 7:30pm
I am so glad that you both got through this.
I have no idea how you are going to get her used to low flying helicopters after this.