Caddymaster Great ride. Hacked before and after schooling in ring. rode in double

started with Kyra's ABC's much better than yesterday!! Then a bit of heather blitz's walk exercise

Resisting the temptation of doing too much, too fast

After last week's rides I suffered from new pains in my back, the result of trying to change my riding posture. My new way of getting my shoulders in the right place works very well, but I got sore muscles in places that I did not realize I had muscles. Not only my back, but my hips and all of the muscles in front and to the outside of my thighs. After a few days of hobbling around I realized that I was being totally unrealistic about my physical fitness and my body's ability to…

ONE WITH THE HERD - A SPIRITUAL JOURNEY

I just joined a few days ago. I live with my herd of 16 horses and one steer in the interior grasslands of BC. I moved from Gibsons over ten years ago because I was
led to follow my hearts desire and move my animals to a place where
they could have the freedom of a wild herd. We live on 320 acres of
forests, hills and meadows, pristine land that fills me with joy and
new discovery even ten years later. Living in seclusion from the…

Conditions: fun hacking with fresh slushy snow on the ground.

Caddy: Worked in ring with snaffle. Great hack through the woods before the ride. snow was close to knee deep in places and Caddy was excited and trotted a lot of the way.

Horses day off. Spent quiet evening with dogs, fire and wine - trying to find good instructional video on starting passage piaffe. I watched the Hubertis Schmidt NEDA clinic on dressage clinic the intermediare II rider and didn't find any help for the pi/pa :(

conditions: snowy rainy so no turnout and no hacking before and after rides

Caddymaster "Caddy" My 12 yo swedish gelding by Master out of an Indus mare (same mare line as Minna Tinde's Don Charly) has shown PSG. I've earned both my bronze and silver medal on him. Presently he is coming back after a month of with a mystery illness (Lyme?)

Worked in snaffle still focusing on the connection, straightness and speed…

Conditions: still raining all day so horses with no turn out. Rode after work. Ring very crowded with Caddy one other horse with Tia.

Caddy: rode in snaffle. Focused on speed control. Suppleness in neck and connection. Worked with lots of transitions. Needs to be rounder and more through, but I think I am on the right track. Difficult ride as jumping lesson going on in…

Be Ridin’ till I die

My bones may creek, my back may hurt, chores take me a heck of a lot longer,
For sure, my butt may not look as good as it did when I first leaned to ride
But Gratitude makes my heart still sings and my soul still flies as I saddle-up
most favorite stead
and head down the road for another adventure and a great little ride.

I know I am a heck of a lot slower, throwing my leg over that heavy old roper,
My rides not as long, I have been long grounded from any… Continue

Training Tip of the Week: Treat your personal space as an “invitation only” area.

To clarify a bit on last week's post because we received some questions: The only way the horse is allowed into your personal hula hoop space is if you invite him in. And you’ll only invite him into that four foot circle if you know you can get him out of it. Think of how you want your neighbors to treat you. You might like your neighbors, but you never want them to just barge into your house. You always want them to walk up to the door, knock and ask to come…

Warm Up for the Training, First and Second Level Horse

The point of the warm-up is to take the restrictions away from your horse's body. So depending on the day, your warm-up could be as short as 10 minutes, or it could end up making up your entire ride.

Fancy a WHERE IS THE LAMENESS IN THIS HORSE Challenge? Videos of Kingsley Spt 09 and Today. 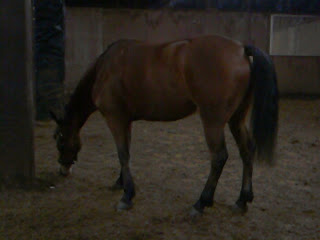 Due to recent set back with Kingsley I've decided to video him and post it on here for all you out there who read and maybe would want to share their opinions. Please do let me know what you think. We are trying to fix him but the truth is that even vets don't quite know what's the problem. Officially, he is being treated for SI strain and serious muscular… Continue

Horses in the wild follow an unwritten code. A would-be leader needs to follow the code of the herd to win their loyalty and apply the code to win the position of leadership.

Grace had a foal

Well Ive just had the wonderful news that my friends pony, Grace, has given birth to a lovely little colt.
We had our suspicions that she was pregnant when she came back last week, from being on loan for a year as a companion. The vet was called and he was pretty certain she was in foal but we decided not to get her tested in case the stress of treatment so soon after the stress of travel caused any problems.
We decided to treat her like a mare in foal and see what happened!
The… Continue

The Smile Muscles of the Seat

Adoptable Horse of the Week - Butterscotch from Crosswinds Equine Rescue

Butterscotch is an 8-year old gorgeous palomino paint
mare, approx. 15hh, 1000 lbs. She has great balance and is a joy to ride, especially for a single
upper intermediate rider -- she would be a great partner for a capable
teen or skilled adult rider. If you let her loose with the
trailer open, she will load herself, and look back like "come on! get
the stuff and let's go trail riding!!"

More details and videos can be found at…
Continue

Welcome back...this week we will take a look at valuations for Horse insurance purposes.

The question of value often arises when it comes to horse insurance.

Given the fact that one of the prime motivations to acquire horse insurance is (typically) mortality or life insurance, the “limit” of coverage obtained and provided is an important element and with “limit” comes the question of “value”.

Unlike human life insurance, where you or I can buy as much life coverage as… Continue

This Week in Horse History - February 22nd Through February 28th

February 23, 2002 - Reining stallion Topsail Cody died from colic. Topsail Cody was born in 1977 and would go on to win the 1980 National Reining Horse Association Futurity. In 1996, Topsail Cody was
inducted into the National…

Janet Brown-Foy was teaching a clinic this weekend at the barn where I ride. She had one horse after the next, and during a quick break she was kind enough to remain in a very cold arena and answer a few questions that I thought might be of help to anyone riding and competing in dressage.…

My Body Does Not Want to Cooperate

This was a glorious week in that I got to ride two times. The sun was shining, the puddles shrank to invisibility, and a warm wind started to blow. I am sooo glad that spring is coming!

During my lesson I told Debbie that I did not think I would be able to get stable enough to start jumping this winter. Her reaction? She slapped my lower leg and said we would work on getting my legs stronger, and also work on getting Mia strong enough to canter so that when I got…