So, two months ago I found a letter in my locker, giving me 30 days notice to find a new spot for my darling Maggie Mae. No reason given. Anyway, after my trainer and got over the shock, I set about finding new accomodations. I know a number of folks were freaked out on my behalf, but I have contingencies at any given time, there are at least two places I could arrive at in the middle of the night with a horse, no questions asked. I set about finding a place. I actually made a call to a… 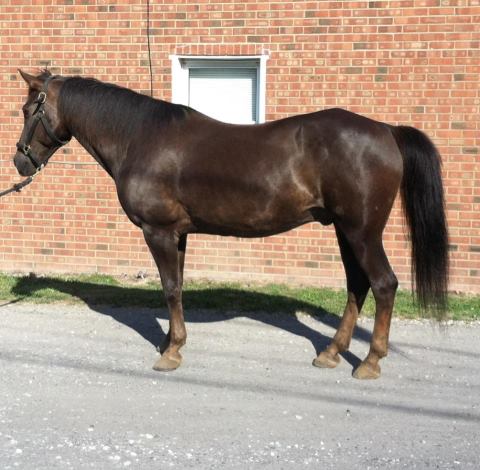 A new month is about to start!

Hope everyone's having a great start to the Canada long weekend! To everyone competing this weekend at Dreamcrest Horse Trials and any other horse shows, best of luck :) Make sure to bring your sunscreen as it is going to be a hot one this weekend as well as your fly spray for your horses!

Reminding everyone about the Peter Menet clinic that is taking place in Uxbridge on July 15th. Peter is the designer of Amerigo saddles and has extensive knowledge in…

For those of you that have been following my adventures on Cole, you know that he is my clicker horse.  I bought him as an unridden 4 year old, trained him for the saddle and headed down the trail.  I have trained horses for trail before, of course, but Cole is the first horse that I have used a clicker to help me from the beginning.

I thought I would write a book on clicker training and trail riding, but then I realized I didn’t quite…

First of all, the herd here at Infinity Farm is fine and very grateful to say so. The high side of the national news focusing on Colorado Springs and the…
Continue

Cathy's so right. This is so worth the read. Check out her new blog post!

Are you sabotaging your confidence? Are you in your own way? Take a look at these three ways to unconsciously, yet effectively, cut your own confidence off at the knees.

How to Measure Your Horse's Hooves

I found this great article on Horse.com that I found pretty helpful. I hope someone else could use the information.

Not all horses need to wear shoes. In fact, some horses experience less hoof-related problems by going barefoot. The only drawback with a barefoot horse is the lack of hoof protection can sometimes lead to injury from hard surfaces, sharp stones, and other…

LEXINGTON, Ky. – With massive wildfires scorching through hundreds of thousands of acres in the western U.S., USRider – national provider of roadside emergency assistance for horse owners – urges equestrians and others to…

The Dire Birds of Doom

We had a nice spring, until the day before the Solstice, then wham, 90° F or above every day.  No more springtime weather for us down here in the South.

On Wednesday I told Debbie I would not be able to do much more than a walk.  As usual Mick was stiff right behind the saddle so I did my usual warm-up of gradual turns and the three speeds of the walk.  After 15 minutes Debbie looked at my face and decided what I needed was to go on a trail…

My grandfather Percy Blake was a horse trader. They say he had a good eye, but I could never quite discern if he was honest or not. Folks respected him, but he maybe had more income than scruples.

Being a horse trader…

Baker's enters the world of blogging!

It’s official, Baker's is starting a weekly blog to update all equestrians on the latest and greatest news from one of your favourite equestrian suppliers. We will keep you informed on our new inventory, equestrian news, convention appearances and more.  We are expanding our social media platform to make Bakers news more accessible and convenient for you.

We are pleased to inform you that we have an upcoming clinic with the renowned Peter Menet on July 15th, 2012 in Uxbridge,…

Sidebone.....At Least It's Not Navicular

A few weeks ago, my horse, Merlin, started limping while I was riding him, so, I checked his hoof for rocks, couldn't find any, cooled him out, and hoped that he would start feeling better. He did, but not to the point that I could ride him, so I assumed that he was just due for a trim and some new shoes. The farrier came and did his job, then I gave Merlin the week off do that he could heal. After his little break was over, I tacked him up and began to ride. Miraculously, he was sound! I rode… Continue

The day Henrietta came to visit.

The day Henrietta came to visit

Some years back, I boarded at a lovely facility in Erin just outside Hillsburg. Erin has to have one of the prettiest country sides I have ever seen. The facility was quite lovely, large arena, huge stalls and great paddocks for turn out. It even had its own "diet paddock" which I found quite interesting. Never heard it quite like that. I don't know why it was classified as such.…

ARE YOU PREPARED FOR THE DAY A PERSONAL DISASTER KEEPS YOU FROM GETTING HOME TO FEED YOUR HORSES?

After not being to get down off of Merlin without help I woke up last Sunday REALLY reluctant to ride him.  I couldn’t get Shannon on the phone to tell her I had to switch to someone shorter for the summer, so I took two bridles and three girths out to the farm.  Luckily I got there before Shannon had caught Merlin and she cheerfully agreed to let me ride Bobby, her British Riding Pony, who had been donated to her program because he had had…

Difficulty Understanding Your Horse and Missing the Winner’s Marks?

Love! that Cathy Rivers is now offering that following:

Horses know exactly who you are. That’s a fact. So wouldn’t it be nice to know exactly who they are? Especially if you’re equestrian genre is competitive dressage? How about resolving – once and for all – the frustrating challenges in your horse’s training, as well as in your own, that’s keeping you both from the winner’s marks.

It starts pretty much the same way for most of us:

One day we see a horse. He’s beautiful and free, with an improbable balance of pride and humility. He seems comfortable with his perfection. Most people can just go on about their business…

3 LESSONS YOUR HORSE TEACHES YOU ABOUT REACHING YOUR GOALS

It's not February, but we are halfway through the year. Wanted to share my re-read of this blog by Cathy Rivers'....

good to touch base on with our goals!

3 LESSONS YOUR HORSE TEACHES YOU…

Dressage has made the media