The last few weeks I have been suffering from an attack of the MS exhaustion.  I had been doing too much and it finally caught up with me.  I had started walking 3x a week for 10 minutes in order to get more fit so I could build up my endurance--that got dropped.  I found out that it was not a good idea for me to stop using my slicker brush on Mia when there is a lot of summer rain, her fungus in her coat came back and by the time my son noticed it had spread over her croup…

Farm Animals in the Zoo?

A friend and I spent the day at the zoo last week. Colorado Springs has a wonderful zoo, on the side of Cheyenne Mountain with lots of natural habitats. As zoos come and go, it’s a pretty special place.

The art of keeping wild animals in cages has improved over the last few decades, and some species tolerate it well. Other species would be extinct…

Control Freak? Who me?

Certainly our horses are the control freaks right?  Imagine feed time: they demand our attention as they pace or paw the floor and fence or neigh to us when it's feeding time; they pick on their neighbors and push their pasture-mates around - or worse - the person feeding them. They'll even pin their ears at a stall-mate through the bars.  We call them names such as pushy, big bully or mean-mare.  Is it them? Or are we, their loving owners, the…

The Feel of Forward.

Forward: A good ground covering gait that pushes from behind, is very uphill, and free. Oh, so free. Sigh. We know all the words. We’ve all read the books, watched the videos, and taken lessons.

It’s the natural way of going for a horse, and it sounds simple enough, but not necessarily that easy once you are in the…

Saddle Grip for the Horse

This week, while musing over my new found security in the saddle I suddenly thought, what about the frictional grip of the saddle to the horse?

When I started riding pads were not considered necessary for English hunt seat or saddle seat saddles.  I was told (and read) that a properly fitted saddle made of vegetable tanned leather with wool padding did not NEED a saddle pad if the bottom of the saddle was cleaned with saddle soap after each ride with occasional…

The first thing she said in her lesson was that this horse had sent her to the emergency room more often than she could count.

(I don’t mean to sound self-serving, but really, you just now got around to talking with…

You know, I love to watch all the horse races when they come on. My family, of nine, and I like to pick out a horse, usually by uniqueness of name, and pick it to come in first, or second or third. The one thing I so enjoy about watching horse racing is being able to sit with family. In my youth of fourteen and three quarters I have noticed something in what seems to be all races. The victorious horse always seems to start in the very, very back. When that horse comes to the final stretch it…

Pause: The Easiest and Hardest Challenge in Great Horsemanship

One of the toughest lessons

in great horsemanship is to just....

Every great horsemanship professional uses The Pause in training.

Western horsemanship trainers call it "soaking", my mentor called it "taking a break". Whatever you want to call it, it's all about…

As my readers know I have been seeking security in the saddle for years.  I have Multiple Sclerosis and I was blaming all of my riding security problems on my MS, my lack of balance, my great weakness, my exhaustion from the least physical activity, my lack of a proprioceptive sense and my general lack of coordination.  I figured that there was NO WAY I would ever feel as secure in the saddle as I did when I was younger.  As it turns out I was blaming the wrong thing (my…

I’ve let loose a few decent rants about groundwork lately. I should apologize about the goose-shrill tone in my voice, but I’m not sorry for the sentiment. Groundwork is so crucial to good horsemanship and too many of us tolerate bad ground manners, in our horses and in ourselves.

It’s our fault. We’re always busy, always late, always distracted. We have a slam-bam-thank-you-‘Mam approach: Grab them, toss the halter on, pull them out of…

I have always been pretty good with horses, but never with predators.  This includes men and dogs.

Scout, my Jack Russell Terrier, confirms everyday to me that I have no business attempting to train predators.

Scout is a serial killer.  I am pretty convinced that she must be reincarnated from some famous serial killer madman.  When she is locked in on the kill, there is absolutely no reasoning with her- she cannot see or hear anything else.  After the kill, she always…

The Fine Friesian and the Awesome Arab- whats your opinion??

I have always loved the Arabian horse and the Friesian horse breed. I love to occasionally you tube videos of the Friesian in action and read and re-read 'My friend Flicka' by Mary O'hara, a book on Arab horses.

I love how majestic the Friesian looks. How they stand tall and proud, with their glossy black coat shining in the sun and their long flowing manes. I love how long their tails are and the feathers that adorn their hooves. The Friesian originally was from the Netherlands along…

Could he just be young ?

So I have been talking about my gelding bucking at a canter and many people said its the saddle or his back or other things . I'm wondering if it is because he is young ? I girl at the barn I am at is having the same trouble with her three year old fully bucking . Could it be that he just is high spirited and learning what he can get away with ? Like a child exploring boundaries ?

Would Your Horse Choose To Train With You if Given a Choice? 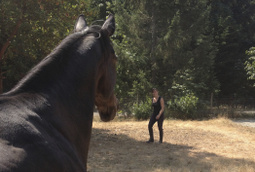 You love your horse and your training sessions.  Does your horse feel the same way?  Liberty sessions are an excellent way to keep your horse engaged and to determine if you're horse is signing up for class.  The VIDEO in this blog demonstrates Hank, a retired Thoroughbred, doing just that.  He's engaged in his classes and…

People are commonly told that they need to be dominant to their horses, but such advice is not in line with scientific studies on dominance behavior. Although dominance hierarchies certainly exist among horses, there is no need for people to try to assume a place in such hierarchies. Horses will naturally defer to people because we, as a species, are more confident than horses are and thus more likely to be leaders in the horse-human relationship. Consider the Budweiser ad run during the…

Build a bond with your horse in 15 minute increments

Are you on a tight schedule?  Are you having challenges finding time for your horse?

There is a solution.

When I was focusing more on riding than bonding I found I often didn't have the time to groom, tack up, ride, cool down, untack and groom again.  I often chose to do nothing rather than interact with my horse.  Then I would feel guilty because I wasn't…

How to tell if you’re turning into a Horse.

To anthropomorphize is to attribute human characteristics to animals or inanimate objects. In other words, make animals over in our image. Is there a word for making ourselves over in theirs?

There are so many ways that I am totally human. I walk on only two feet…