I have been riding the Welsh-Arab mare Cider for a few years off and on. All this time she has been trying to get to her owner, Shannon, in the center of the ring whenever I tried riding her around the ring on loose reins (we call it her nose dive.) Since I had gotten lost in the glory of coordinating my aids to get the responses I want I mostly used this irritating habit as a wonderful chance to practice coordinating my aids properly. And I can get her to go around the ring on…

Pursuit of a harmonious relationship with the horse has led me to many philosophies and instructors. I've always known that the horse is an extremely sensitive creature and despite his ability to physically overpower any human, has submitted to a role of servitude.
I have been fortunate to be inspired by the insight and analysis of some very influential people. Principally, Tony Gonzales, who taught me to observe and analyze the foundation of motion....the feet. Sally Swift whose brilliant… Continue

With apologies to Aretha, I've discovered a new spelling for Respect:

Of late, it has become crystal clear that Sammie simply does not respect my leg. Upward transitions and forward energy were easy things for our trainer Meg to get from Samba, but whenever I hopped on, fuggedaboudit. Here I was, committed to showing at Intro level in March, and I had to enter into negotiations with Sammie any time I wanted her to pick up a trot. Intro… Continue 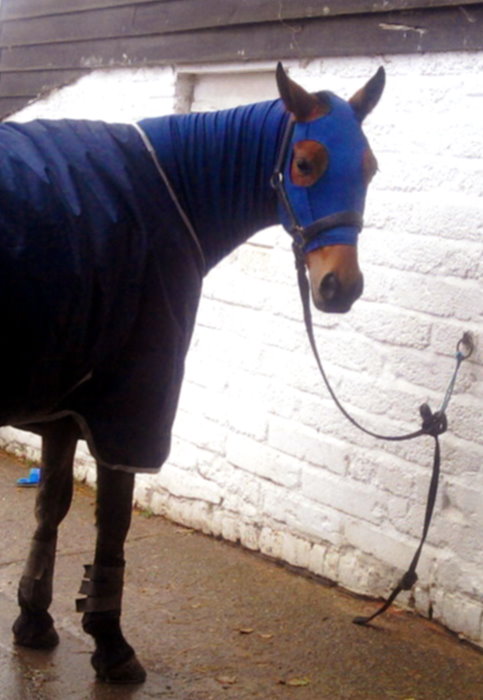 Working outside is current weather is rather interesting. It seems that glorious, sunny and warm October was sent down to make up for what is happening now.
A is for Absorption exhibited by my clothing. Generous of it but seriously unnecessary.
B is for Books read in a hot bath while recuperating after A.
C is for clients. Super Training Day today with a pleasure-to-teach rider not bothered by W, R and H.…
Continue

Does anyone out there have any experience with the Viega line Lustiano mares? I have one who is extremely sensitive. I would like to know if there is anyone else with the same. The photo is of my mare's Sire - drop dead gorgeous but read your mind sensitive.

I used a bitless bridle on her last week and the next ride with a regular french link snaffle she did not trust that the bitless action was going to be set in place again. You could see her think everything through.

Welcome back everyone to another edition of the Equine Science News blog, I hope all of you and your equines are healthy. This week obesity, equine metritis and horse dung have all featured in the news, but first I’m going to discuss equine welfare in the US.

The American Horse Council (AHC) have created a new national welfare code looking at the obligations of horse organisations to equine care. So far some of the large equestrian organisations in the United States, including… Continue

Choosing the Right Coach for Your Child

I am the parent of an 11-year-old girl who is serious about horses. She's been riding for 5 years in California, and we just moved to Michigan. For two months now, I've been looking for a good stable and instructor. Her former teacher in CA was CHA (Certified Horsemanship Association) certified. Should I be limited to finding a CHA certified instructor? What other questions should I be asking to insure her safety with a new instructor? My daughter is riding English with focus on…

Yes, I have been busy! Not sitting in front of my computer of late hence the “no blogs” from Megan. I have much to tell you all..... no I’m not getting married!
Firstly, I went to NZ a couple of months ago to do a run of clinics. This was my first time teaching in the “land of the long white cloud” and I really enjoyed it. Everyone was keen to learn and they want me to come back in January. ( i just might miss some of our hot hot weather over here)…

"All of Life is an Experiment" - Ralph Waldo Emerson

Thomas Ritter: Turn on the Forehand in Motion with Accompanying Videos

Turn on the Forehand in Motion

The turn on the forehand in motion is an excellent suppling exercise for the horse’s hips. It also has a suppling effect on the abdominal muscles and the neck, if the rider applies bending rein aids. It is a basic exercise that can be ridden with relatively young horses, and it remains useful throughout the entire rest of the horse’s career.

Hi everyone... a lot of you have been asking me about how i begin to diagram a pattern or how i start to memorize a test.

I start with these blank arena diagrams... I find them useful for a number of things.
1. Memorizing regulation tests.
2. Learning the exact geometry of the arena.
3. Learning my exact tangent points for movements such as circles and serpentines.
4. Drawing my tests from beginning to end.
5. Drawing each movement according to where the… Continue

My teaching was cancelled today, one of the things that are rather unsettling when you freelance, especially that the cancellations very often come day before and not much else can be arranged for in such a short space of time.
I thought it would be a good idea to do some resting but I am not convinced one day of rest is so beneficial. I actually feel my bones and joints more! Must be ceasing up. After half a day leisurely in bed I played a very very good housewife and spent good few hours… Continue


Actor William Shatner has had his share of adventures as Star Trek's Captain James T. Kirk and Boston Legal's Denny Crane. Now he's climbing aboard a reining horse to put it through its paces, and help raise money for the Make-A-Wish Foundation of Oklahoma.
It shouldn't pose too great a challenge to the well known Hollywood actor and philanthropist.

It was love from the moment that I met my horse... I was completely smitten with my handsome boy. Over the past few months we have gotten to know one another, and I have come to realise that my equine friend has many 'faces'.

The Master Manipulator: He knows how to make his immense cuteness work for him when he wants something (like yummies or a neck scratch). It is the face that won me over when we met... and I think that he actually is able to crank up the cute factor by making doe… Continue Well, I am not entirely sold on the bitless bridle yet. We tried (mostly for the fun aspect) a bitless bridle on my mare - a very sensitive psp andalusian. What a ride. Wow, she was trying to figure that thing out from the very beginning - trying to anticipate our wishes. pretty much all she did was passage for the first 5 minutes, do some spins and maybe after 45 minutes could we get her to walk.

OK, I hear you. Color me persuaded, if not convinced. The chance at riding in a Debbie McDonald clinic is one that should not be passed up. So I just went to the California Dressage Society website and handed over $65 for my 2010 membership dues.

The CDS regional amateur clinics are an interesting phenomenon. I don't know if other… Continue

The Warm Up: Where the Test Is Won Or Lost

In this weeks installment I've listed exactly what you need to do in order to take the mistery out of the warm up.You never know how your horse will react to new settings until you expose him to them.

Horse Nutrition: Hay...do you know what nutrients your horse is getting?

As winter approaches and pasture sources are no longer available, the selection and purchase of hay or other roughage sources becomes an important decision for horse owners. Owners that have horses on confinement face the same decision all year. The quality and nutrient content of the hay or roughage source is critical because it is the foundation of the horse's diet and provides 50%- 100% of the total…