It is official, Cider and Mick LIKE having warm butts!

Last Sunday it was cold with a stiff breeze so I was glad I could introduce Cider to the Rambo Competition Sheet exercise rug.  After Shannon groomed her I put it on and off her back and croup a few times and made sure to open and close the Velcro that holds it together at the withers.  Long ago Cider had been evented so she probably was familiar with blankets though she had not seen one in years.  Shannon saddled…

Thank You for the Eggs.

I came in from the barn yesterday with a Thanksgiving hangover. I confess I’m a glutton. I totally over-indulged in the hairy abundance of the day.

A Bit About Me and What I Do

Are You Expecting Too Much of Yourself and Your Horse?

We all want success and we want it now.  We've been taught to "reach for the stars" and set big goals.  As a result, sometimes we expect so much of ourselves and our horses that we are rarely happy with our results.

If you've ever said (even to yourself),

"I should be better than this!"

there is nothing like getting back in the saddle.. For the past 3-4 years I've been in and out of the saddle, here and there for a trail ride on vacation or helping a friend out.
There's been a feeling missing from my life I've finally realized. Training, competing and just being around horses is such an amazing feeling and I miss it, a lot.
So on a visit back home to Montreal I stopped in to see my trainer and all…

I Wimp Out In the Cold

We are on a temperature roller coaster down here in North Carolina.  It is around 75° F today, but on Monday morning they are predicting a low of 19° F, if not lower.

Last Monday, when I rode Mia, it was warm, so warm I put on my technical fabric cool riding shirt, and by the end of my ride I was wishing I’d put on my ice-fill sleeves too since I was sweating.  Two days later when I got to the stables for my… 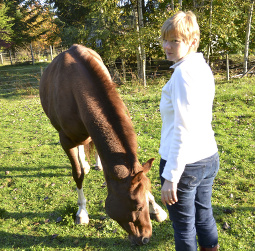 Horses are hungry. The only time a horse is not hungry is when he is on his death bed or very stressed (unless he's a stress eater like me...then hide the chocolate! er... grass). Horses will choose to sleep or play at times, but if you walk up and ask (with a big bucket of treats) while they are sleeping or playing, "Are you hungry?", you won't usually be…

Creaky Old Horses, and the Women Who Love Them.

I have a Grandfather Horse. People say he looks good, all things considered. I notice the standard for looking good drops a little more every year, just like his back. The same is probably true for me…

He has his very own veal pen at night;…

For hundreds of years, the horse has been recognized as… 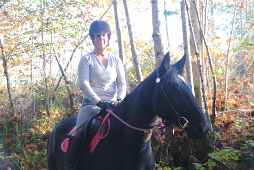 In the last blog post I introduced you to Alex and her lovely three year old filly, Kalipso.  Within days of starting Kali under saddle, Alex was out riding safely on the trail.  If your baby has a good start they can be safely and successfully introduced to the wonders of the world early on.

Last week I watched Kali wander past a bed frame on the side of the road,…

It Was a Bright and Shining Week

Because of the mares.

Last Sunday I got to ride Cider.  When I greeted her she gave me a soft blow.  When Shannon groomed her she gave little snorts of approval.  While I rode her around the ring (at a walk) she started rewarding me when I used my aids properly with more little snorts of approval.  Now don’t get me wrong, Cider still insisted that I get myself perfectly centered in the saddle from the start of my ride.  But Cider’s hard work over the past few months is…

It’s been quite a year so far. We had fires the first half of summer and floods the second half. It’s like 2013 was determined to stand out from day one. It’s been year of erratic weather in our lives as well; lots of reluctant change and no shortage of loss. Some of the changes have been nothing but good, and even that doesn’t always mean easy.

On top of that, this year had serious velocity. Such speed that weeks were the length of days, and…

The Oakley Diaries - 15: A Banner Day

He didn't refuse to go over an obstacle once yesterday. Most significantly, he went over a new jump of his own accord.

They weren't big jumps, about a meter high, no more, but he went right over them with only one slight hesitation.

I suppose most riders might not find this particularly outstanding, but two years ago it was a life-and-death argument to get over a simple trot-pole. He would explode over it and follow it up with a wild-west show. The arena has a couple of…

Does Your Horse Answer by Rote?

“Répétez après moi.” It’s what the high school french teacher said and it’s what we did. We repeated words after her, and soon, we repeated canned conversations back and forth. They included lame greetings, followed by asking where the library was. It was the…

I Got Ambitious, Did Too Much, and Got Exhausted

Well, it finally all caught up with me, making the wool saddle blanket so I could use it with my Corrector, cleaning my saddles every time I rode, and going up North to take my yearly lesson at North Fork.  I started getting more and more tired, then I entered a fog of exhaustion and it started affecting my riding.

Two weeks ago I started off on a good note.  I had gotten the book “American Dressage” by Chuck Grant, found something in it I could try in my riding, and I…

Hello All !!!after a long show season and winter approaching  take some time to refocus, refuel, and rejuvenate with a clinic . I am a rider and also a Certified Yoga Instructor through Louise Cameron,s Galloping Yoga Program. I will come to your barn  and deliver a fun and experiential program that will awaken your senses and bring new life to both you and your horse. Through Intuitive, conscious movement your energy will be free to flow, allowing natural balance and confidence to come…

For the last three weeks, all I have done is stick to my guns. I've ridden almost every day since the doctor released me and I honestly cannot believe what I have achieved in that short amount of time. It is everything I have dreamed of and I could not be more proud of my horses, and for the first time in a very long time, myself. My knees are holding up pretty well, and so is my back surprisingly. We've worked our way up from ground…

This Halloween was the 14th anniversary of moving here to Infinity Farm. In the beginning I called it the Howlin’ Cowgirl Rancho. Old friends still like that name better. And the first few years, I did a whole lot of howling at the sky. Moving here was a strategic retreat, a witness protection sort of escape, from a life that was falling apart…