Mia is old. Mia is ancient. Mia has arthritis problems in her hocks. Mia has the most sensitive mouth of any horse I've ridden in the past 47 years.

I have been riding Mia for 8 years, accepting the fact that she will never, ever become completely sound. All this time I have been… In several recent studies researchers have confirmed the benefits of pressure -distribution thanks to saddle trees, making them a better option than some treeless saddles or riding bareback…For example,…

The net cash flow was $613,000 while the net income was $161,150 for the year. The positive net cash flow represents the amount of money that the business received from its activities that include financing, operating, and investing. Some of this money is not directly in the form of profits but as loans, capital, and sale of inventories. On the other hand, the net profit refers to the extra money that the firm raises from its…

Am I allowed to use a bitless bridle? 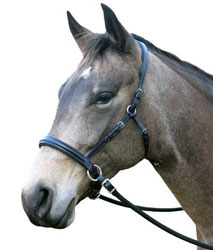 I'm asked this question at a few open shows per season. Currently most rule books do not permit bitless bridle.

At the Global Dressage Forum. Dr. Andrew McLean one of the panel experts “How you train the bitless bridle depends on the hands at the other end. I think you can have the horse light in anything.… It’s how you train it.”

When asked if a…

Insights into The World of Horse Racing - The Most Exciting Competitive Sport!

Horse racing is the sports of running horses, driven by jockeys. Horse racing is one of the primitive sports which are continuing for centuries, and the most fantastic aspect of this game is that even today the basic concept of this sport has encountered almost no alteration. A crucial feature of horse racing is that the horse which reaches the destination first and foremost is declared the champion of the racing competition. …

I Moved My Grip Up an Inch or So

I Move My Grip Up an Inch or So

When I talked to Debbie before my lesson on Wednesday, I told her about my hip bursitis and that I would not be very ambitious, no “rider's push-ups”, limited 2-point and limited posting trot. I had been hobbling around all week and I did not want to do anything that would trigger my hip bursitis again! I asked to use the Equicube so I would work different…

Ready for the show – bitless or not! 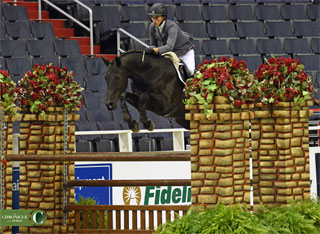 I applaud Melanie Ferrio-Wise  not so much for going bridleless at the Washington Horse show, but for the systematic process she took to get there.

As a riding a teacher, I’m excited about process– understanding and enjoying the journey, not just the results.  Teaching skills and cues to your horse, layering them to produce the manoeuvres you’ll need and then…

What is Muscle Memory?

If you've ever worked on your posture or a set of aids for a movement on your horse, you've probably heard the words "muscle memory.” But what is this mysterious thing? Is it something real or just a part of dressage riders’ folklore? Can we do anything to make our learning more efficient, or should we be suspicious of "automatic" riding as less creative?

I Triggered My Hip Bursitis

I Triggered My Hip Bursitis

Last week, when I rode two horses using my regular Prussian Sided stirrups with the Super-Comfort stirrup pads, I triggered my hip bursitis. My hips used to bother me many years ago until I bought my Back on Track boxer shorts and started wearing them every day, and last week was the first time in YEARS that my hips hurt, specifically my left hip joint, especially… 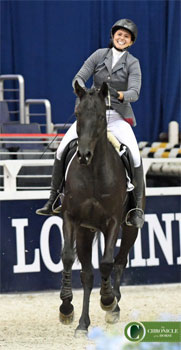 Even with one refusal and two rails, which dropped them to 24th in the placings, Melanie Ferrio-Wise  was delighted with her performance at the Washington International. She rode the course with a neck rope instead of a bridle!

She describes her horse as a tough horse unable to handle the stress of his previous life in competitive dressage. “He doesn’t like…