Just In Case Your Are Not Familiar With Your Horse's Foot.....

Below is the view of the foot most often seen by the bare foot trimmer. These are the structures and areas of the horse’s hoof anatomy that we most often directly affect, when trimming. Learn the names and proportions of each area of the hoof. It will help you trim correctly and also help you recognize a healthy foot.

I’ll admit, I haven’t been feeling ready for show season. Between my struggles to find a saddle (stay tuned for a saddle fit post coming soon!), the looming financial toll, and the fact that the test movements were not confirmed to where I want them, I could use another few months!

I have been fortunate to…

Whoot!! Whoot!! We've come so far since we bought the campground in 2011 and have accomplished so much. Let's look at a recap of things gone by:

Share YOUR Most Interesting Hoof Problem Story …..And you will be entered into our first drawing of May to win one of the pictured hoof picks. This hoof pick has a convenient brush for thorough cleaning and it is equipped with a rubber grip for easy handling. Comment on this post with your story and be sure to leave your name and email so we can reach you when you…

Buying a horse is a huge investment. For some it may be the culmination of a dream come true, while for others horse ownership is born from necessity. Either way, knowledge is key when deciding to buy a horse. There are a great many factors to consider- breed, age, housing, feed and medical expenses and the like. For that reason, it is important to approach horse buying with a clear understanding of both the buying and owning process. These guidelines will help you understand the process and…

I have been thinking a lot about the new challenges Shannon’s Arab-Welsh mare Cider has been presenting me.  I went through my old calendars and I started riding Cider regularly in 2006 until January 2012 when I switched to riding Merlin and Bobby until I could get Cider a saddle that fit her properly since her back had changed.  At the end of those 6 years Cider was super responsive to the bit (Dr. Bristol snaffle), aware that a twitch of my little finger was a valid aid to…

I attended my first Equine Affaire earlier this month. Boy, what an experience! A friend and I were on the fence and finally decided at the last minute. I didn’t know what to expect going in, but it was bigger, and better, than I imagined! I soaked in all of the information I could talking to the vendors and attending clinics,… 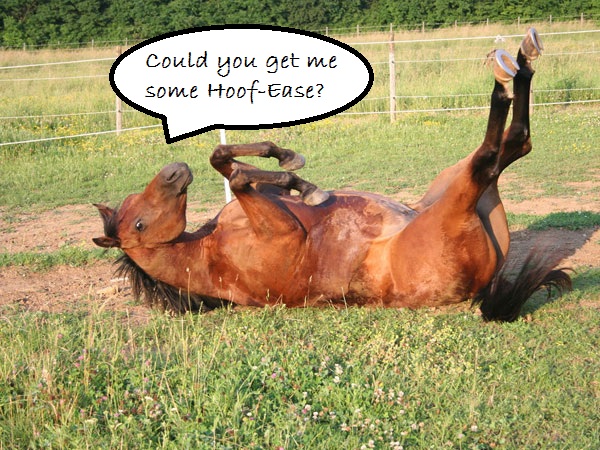 So…here we are. I’m 27 years old and I’m finally writing my first post on my first blog. Timmy and I started Equistributors with big dreams. I fully believe in Hoof-Ease and I fully understand the importance of sound feet. I hope the people of the equine world end up seeing it it same way.

I ESE at the elementary level. I have grades K-5 in my class.

My husband drives freight trains. delivering to local businesses and…

I have always said people were the most difficult part about being involved with horses, and I stand by that statement. My dad and I have affectionately named this quirk "HPS," standing for Horse Person Syndrome. In a sport where so much emotion, pressure, money, fears, expectations, etc., are a part of the daily…

I've just joined Barnmice and will be sharing posts from my new blog essentialequestrian.wordpress.com!

Today is the First Day of the Rest of My Life… My sister decided that she wanted to buy another horse last fall because Ranger is getting older, and she can’t ride as fast or as far as she would like. Don’t worry, she is going to keep Ranger—and ride him as much as she can. She just wanted to ride more than he was able. I wanted her to, too. I would love to go on long rides with her and Cole.…

“That horse has been beat!” is her opinion. Sometimes you can look at a horse and just tell. He’s showing every sign, and he has been passed from owner to owner. Abuse is always possible, but working with him, I don’t think he’s literally been beaten. Who’s right?

The horse is. It’s my As-If Rule.  His history doesn’t matter that much. If he acts as-if he has been…

Understanding the Body Mechanics of Working in a Frame

Most riders eventually understand that it is ideal for their horse to work in a frame. A frame is a way of carrying the body that utilizes the ring of muscles by asking the horse to engage his haunches, lift his back, travel lightly on the forehand, round the neck from the base and drop the head. This is an efficient way for the horse to move that prevents injury and helps the horse to carry the weight of the rider. Unfortunately, many people lose sight of the whole picture and focus only on…

My boyfriend, Kevin, wasn’t able to ride with me last night, but he didn’t miss too much. It was rainy, cold and the river was too high to cross. At first, I didn’t even think I could ride outside because of the rain. When I arrived at the barn, I peaked into the indoor arena, and a horse was being lounged. I figured I would wait until it was empty, so I cleaned a couple of stalls. The lounging was over, and I started to saddle—and the rain stopped! Hurray! I… Continue

Slightly More Security in the Saddle

Many, many decades ago Piero Santini wrote in one of his books that one reason to wear the knee high boots was that when the leather of the boot was against the leather of the saddle flap the rider’s grip was stronger.  It has been decades since I rode in the high leather boots, but I do look back at them with fondness, and every once in a while I consider getting high boots again but they look so HOT.  With my MS anything that makes me hotter makes my MS symptoms worse so I…

The Art of Teaching Your Horse to Read and Write

Horses are fluent in the spoken language of the horse.  Any movement that you ask your horse to perform is something he already does naturally.  The horse can carry himself with perfect balance while executing the most technical movements.  We do not need to teach the horse how to move.  However, we do need to teach the horse how to move under our weight based on our cues.  This is the equivalent of teaching a child who can speak how to read and write.  We must take the horse’s natural…

I’ve been thinking about the words we use to label our relationship with the animals in our lives. It isn’t politically correct to say we own a horse; instead, we are its caretaker. That dog doesn’t belong to you, you’re its guardian. Swell.

Referring to an animal as a family member is the norm; it’s common to hear someone in the barn refer to themselves as Big Red’s Mom, or say that Bandit is their fur-child. No shortage of Fur-Daddies either. I understand the intention and if the…

If there is one way I can describe Cole Train is that he is an overachiever. Particularly in the arena, he tries so hard that he often overdoes it. When I taught him to leg yield, it quickly morphed into a side pass. Now we struggle to get a leg yield. His slow downs often turn into halts, and halting is stopping on a dime. His walk-trot transitions tend to launch the rider right out of the saddle. Of course, his arena trot has so much… Continue

Riding can be a form of moving meditation.  When you do a walking meditation you work on quieting the mind, becoming fully aware of your surroundings and experiencing the present moment.  You use intense concentration on each movement your body makes to help bring you into this meditative state.  Walking meditation is often easier for an individual than a long sitting meditation because you do not have to quiet the body and the mind.  I would argue that a riding meditation is even more…