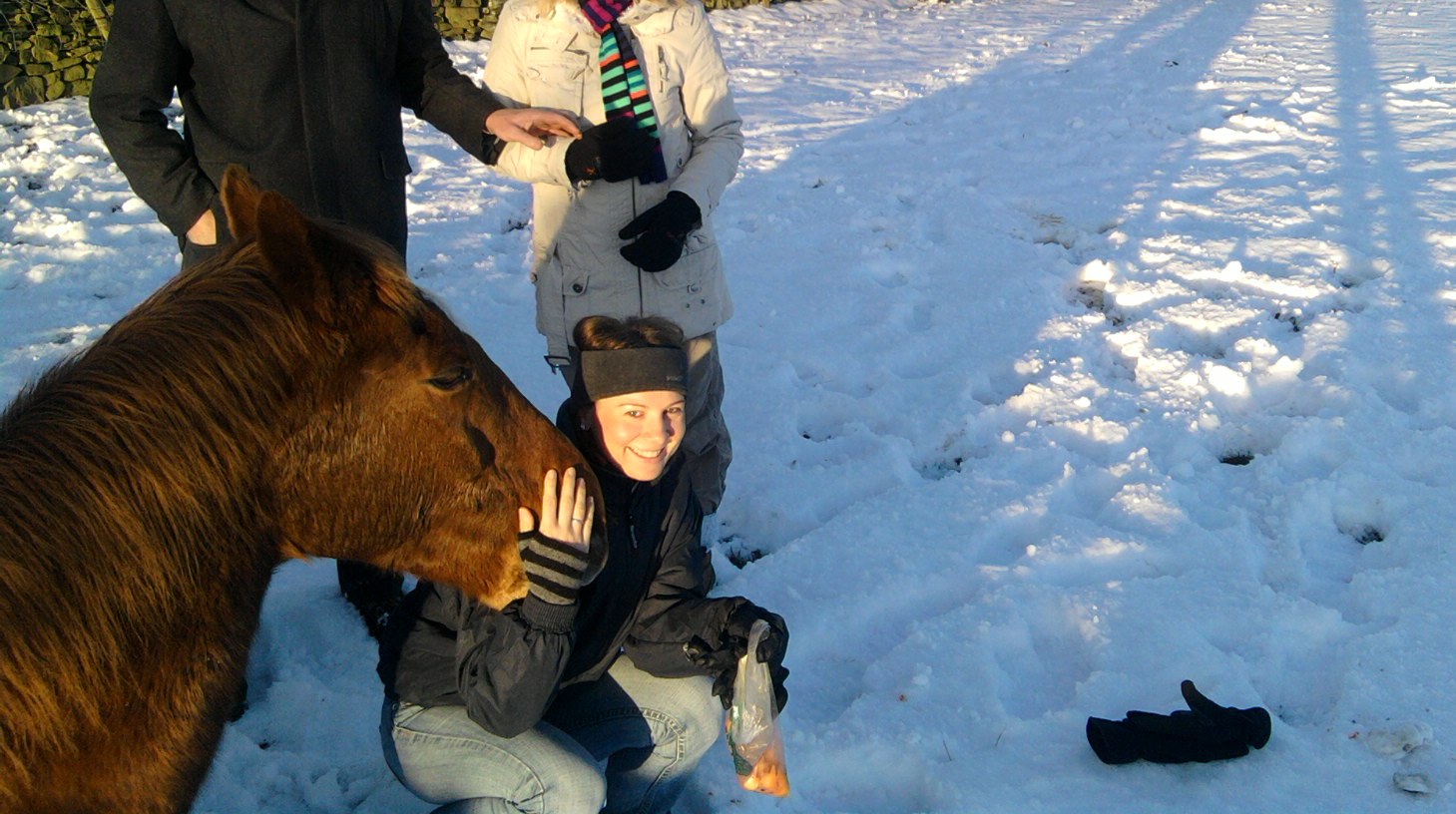 Christmas days are not easy for me, being away from my family takes its toll at this time of year. However, I can safely say the 2009 was good for me and I spent a lovely few days with Rick and his family in Cheshire who made me feel very welcomed. Lots of delicious food and probably a stone more later I am back in London and it's days away from New Year...

The trees are coming into leaf
Like something almost being… Continue

The other day on a blog, http://theridinginstructor.net, I wrote a post about boarding contracts. It was triggered by a recent situation where my daughter took over care at a small boarding stable here, when the owners went out of town. A horse went head to tail down (seizure) and remained that way for at least 8 1/2 to 9 hours. The horse owners refused to get a vet for the horse. The stable owner had no board contract, and the vets will not touch a… Continue

Once You Arrive At The Show You'll Need...

If you’re thinking 2010 might be the year to go to a recognized USDF/USEF dressage show, then here’s what you need to have.
I’ve made a list for you of what you’ll need for documentation
once you arrive at the competition grounds.

I have had a client who questioned the appearance of blisters after riding, which then disappear again after about 20 minutes. I suggest the following might be happening. The spinal vertebrae have three processes. Between the spinal processes, you will find the spinal dorsal ligament system . There should never be any pressure on the spinal vertebral processes, however, if you have a saddle which has a too narrow chamber and has been lying on the spine itself, probably at least one of the 7…

My mom turned 70 the end of November. She's still an avid horsewoman and an active rider and driver. I've had Pixie at the indoor arena since Thanksgiving weekend and she is now nicely going. 6-weeks green but solid thanks to Heather's training (I'm getting too old to bounce! plus I needed a break from riding after the intense summer).

I asked my mommy if she wanted to ride her pony before I sell it or ship it to the H/J sales barn as soon as a pony stall frees up. So she came down… Continue

Ride Fit 1-2-3: Making Sure Your Barn Chores Aren't Causing You Postural Problems in the Saddle

I had a great question recently posted to my page about the effect of barn chores on your body, as a rider. Lorel's question about barn choring is actually quite common, so she gave permission for me to post her question here in the blog so that others could benefit.


Lorel's Question:
Hi Heather, I struggle with a problem which I am sure many other riders have. I am employed working with horses then do farmwork when I get home so I have… Continue

This Week in Horse History - December 28th Through January 3rd

This Week in Horse History - December 28th Through January 3rd

December 29, 1945 – The record for the slowest winning time for a steeplechase race was set by a horse named Never Mind II. Never Mind refused the fourth fence during a two mile steeplechase and his jockey, assuming they were defeated, returned the horse to the paddock. The jockey was then informed that every other horse in the race had either fallen or been disqualified. On learning this, the jockey brought…

The End of the Year

Ah, the last week of the year. Since I won't get to ride this week, I decided to reflect on this past year.

I went to my calender and counted all the horses I rode and all the times I rode this past year. I had a pretty good year, I went over my goal of averaging at least one ride a week, though some weeks I did not ride at all. All together I rode 80 times.

I also achieved my goal of riding more horses, I got up on 6 different horses this year, though on…

When riding your horse, it's important to keep your hands forward in what I call the "work area".

The work area is just in front of the saddle above the horse’s withers. Put your hands in that position and draw an imaginary box around them. That box is your work area.

No matter what rein aids you're giving, keep your hands in the work area. If you bring your hands closer to your body, you steal power from the hind legs. If you put your outside hand forward, for…

Understanding the Truth About Bits

Dear Julie,
My question to you is what is your opinion of Myler bits? I came across a book recently that talked about the Myler comfort snaffle. I was surprised to learn that not all snaffles are exactly what they are supposed to be. The reason I'm asking is my horse Montana is in a D-ring snaffle. I have noticed at times him pulling the reins and opening his mouth. Even when I put him in the round pen with saddle and head stall on he does the same thing and I'm not even on him. It…

So what are you going to do next year to win a rosette....we cannot all win gold medals but we can all produce a new personal best, a new PB, in some area of our lives..... and it is not being conceited or over confident to aim high. As Nelson Mandela said.... "We ask ourselves, who am I to be brilliant, gorgeous, talented,and fabulous - actually who are you not to be? As we let our own light shine, we unconsciously give other people… Continue

He got the better of me!!

Well, I don't mind admiting when a horse has the better of me, and this one certainly did!! It was a hard day of riding this tricky horse , and he got the best me on more than one occasion. As you can see in the photo , he's a mighty beast and will take every ounce of my being to make something of him. Wish me luck!! 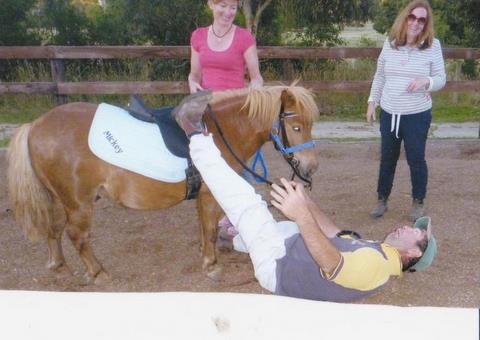 Last week we told you in part one of this blog that there were five factors that influence starch digestibility in the small intestine. Here they are in more detail.

Did you ever wonder exactly HOW music effects your brain and your body?

Music has well established psychological effects on moods and emotions.

We already know this if even subconsciously. If music did not have a physiological effect on our body and mind, marches would be played at bedtime and not at the half-time of football games. Lullabies would be heard at parades and Gregorian chant would bombard our ears at the grocery store.
Want to know more? Here is the scientific answer to how music affects our physiology and… Continue

My beloved healer horse, Spring Thaw had a bit of an emergency last week/this weekend...

He started swelling on Thurs 12/17, local vet Dr. Fazio came out and found a puncture wound in the fatty pocket above the eye (don’t know name). He flushed it and gave iv antibiotics, ban-amine, and bute.

Dr. Fazio came Friday AM to check it and it was worse and pussing, he wasn’t willing to mess with it and said to get him to clinic for x-rays, etc.

This Week in Horse History - December 21st Through December 27th

This Week in Horse History - December 21st Through December 27th 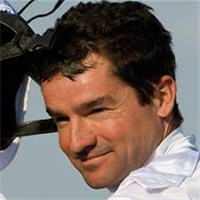 My Jumping Cavesson Brings out Cooperation

We barely missed out the blizzard of 2009 down here in Stanly Co., NC. We got some sleet, a little snow, an inch of rain and lots and lots of puddles and mud. In spite of the drama with the weather I rode three times this week.

I got tired of warming up my bits before I ride so I dragged out my old Jumping Cavesson bridle (you can see it in my pictures, Numbers 5, 6, and 7,) and used it…

Seasons Greetings Barnmice readers – I hope you’re all enjoying the Christmas period. This week I’ll be talking about genetics, human health and finally how science could provide you with a novel Xmas present this year.

First, new research has found that humans could be genetically closer to horses than our canine friends.

Horseback riding is all about balance and staying centered. You always want to keep your horse in good balance for his stage of training no matter what your discipline.

It doesn't matter whether you're a dressage rider, a western pleasure rider, a trail rider, or an event rider. Correct balance is essential to effective riding because the center of your balance directly affects your horse’s balance.

After discussing a couple of paragraphs from Gustav Steinbrecht’s “Gymnasium of the Horse”, I would like to share a very interesting account of his own personal riding. It’s very rare to find eyewitness reports on the way the old masters rode. We usually only have their books, but no way of finding out how they actually rode themselves. We are lucky that Paul Plinzner wrote a brief characterization of Steinbrecht’s riding in a short homage to… Continue