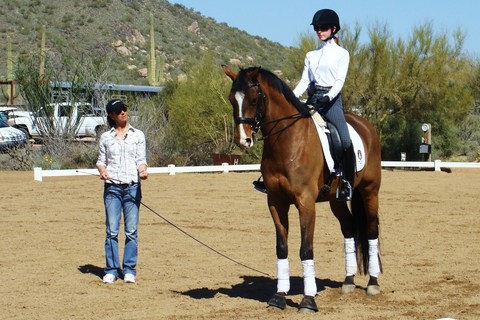 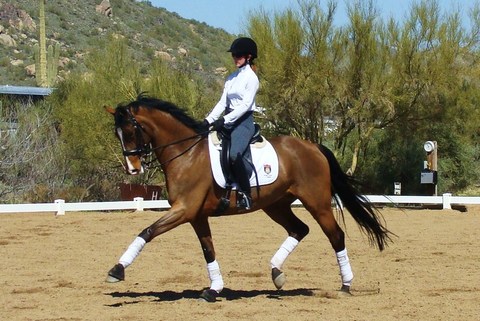 This past weekend Chance and I had the great opportunity to ride in a two-day clinic with Shannon Peters thanks to a $400 grant I received from The Dressage Foundation. It was so much fun! On Saturday Shannon started right off the bat by…

Adjusting to my MS--Lower Legs

When I got back to riding after being diagnosed with MS I found that I never knew where my lower legs were.  I would start of riding with my lower legs in the right place, and sometime during the ride my attention would go elsewhere and my lower legs would start drifting along the horse's sides.  My toes were pointing too far out, I was pivoting on my knees, bringing my lower leg too far back, and when I tried to correct this I would put too much weight…

Well, Muffin is coming along.  She was very good last Saturday, and then Sunday, with no martingale on ... lets play throw our head in the air and race around the arena!  At least she was going somewhere...  So, around and around we went, until she gave up and came round.

Monday, I was trying to give her a light stretchy ride... doesn't work if she's coming in season.  By Wednesday, we had full blown evil child.  When you can't get your horse past a little drip in the arena,…

Finally and at last, the ice on the pond has thawed and birds have returned. It’s our spring break.

My elderly, domestic ducks waddle off to the pond with a very officious gait, business-like in their bathing.  They quack around with wild ducks, exchanging opinions. Mine are easy to tell apart, they swim much lower in the water and act like they own the place.  They return to the yard in late afternoon for dinner- the old gelding shares his with them. It has been a long,…

Equine Canada has an EVENTING Dressage App for that!!

Attention eventing enthusiasts! Canadian Eventing Dressage Tests are now available for your your iPhone, iPad and iPod Touch on the iTunes Store at http://bit.ly/fGFqcw 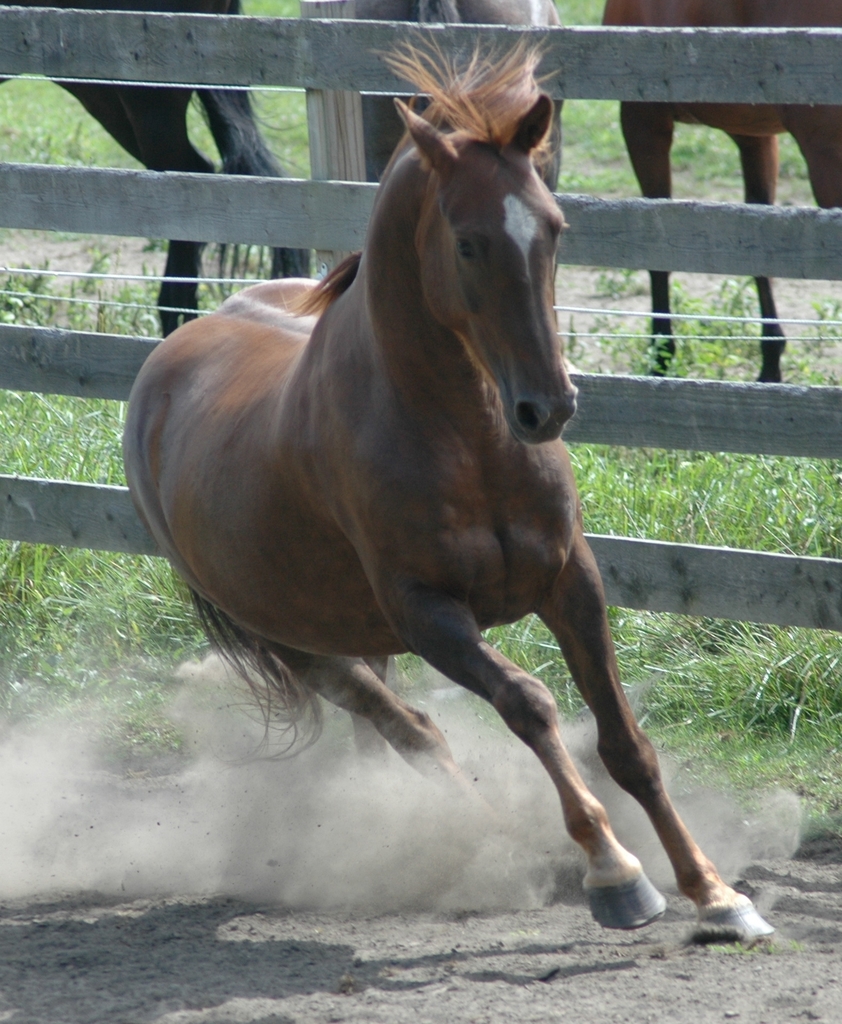 A Bi-monthly Newsletter from Horse Play

Message from Aidan – the Alpha Mare
Spring might be coming! Rain, mud – but mud is better than ice - then there…

Welcome to spring!  Horse show season is under way and bathing suit season is just around the corner.  A winter of holiday feasting and reduced activity may have left you with a few souvenir pounds to help you to remember last season.  I was recently asked if I think that counting calories is a good way to lose weight so I…

Packing for yourself is hard enough. Try adding two horses and Olympic dressage rider Belinda Trussell! I don’t know if I’ll ever sleep again! I am heading to Germany with Belinda Trussell as she competes on the European Spring Tour, along with her Grand Prix and WEG mount Anton, and young horse Biasini.

Our equipment and luggage (minus carry on bag) has to be at the Sea Air terminal in Mississauga before 11:00am on Monday the 21st. We then have a day to…

Augusta, KS Meet Jjs Summer Breeze, who holds the Guinness Book of World Records title for horse with the longest tail. Editor Stephanie Doyle “interviewed” Summer (via her owner, Crystal Socha). Summer is a registered American Paint Horse and also is registered with the Pinto Horse Association of America.

Just how long is your tail? Currently my tail is 13’6” long. When it was officially measured for the Guinness…

I finally got around to working my mare with some groundwork Saturday afternoon. First I got her all cleaned up and then took her out to eat some grass. Seems like this spring I am so far behind with what I normally do with her.This winter has been difficult with all the rotten weather. I still work and sometimes finding the time to get out to the barn to work her, gets away from me. I board her at a small farm about 3 miles from home. I do go out almost everyday and help put out or bring in…

Ever since I got my first horse, the Anglo-Arab Hat Tricks, I have been trying to ride at as high a level as I can.  I faced repeated frustrations due to my undiagnosed MS as it affected my balance, coordination, and proprioceptive sense (I could not tell where parts of my body were.)  In spite of all this my riding gradually improved, and I got to riding reliably at a low to middle intermediate level in the Forward Seat system.  Even my jumping improved, not that I was ever…

...and IthatI is why I have horses.

Little guy is going to be coming up to live with me in a couple months, so, seemed like a good time to start the journey towards loading into trailers. He leads about anywhere just fine, but my trainer suggests that we teach him to get on himself, which means sending him into the trailer. Well, he hasn't done anything like that yet, he's just a BABY (ask him!). So, I took the trailer down last night, to find out that there was a snowfall warning for today. No problem park the trailer, do some… Continue

Riders know this lesson; if you get bucked off you have to climb back on. That’s the rule. Horse or rider are better for it. They say that the hardest thing about riding is hitting the ground (sigh) but I disagree. The recovery is often more challenging.

I think we are afraid of what we know- more than the unknown. Experience makes it personal. Once we have…