Rider Rest: The Night Before the Horse Show Humans are designed to thrive in a cycle of stress/challenge and recovery/rest. Tomorrows horse show takes care of the stress, but what really counts as R&R to perform at your best?

Too much time with your horse...

I just read a very interesting article in Equus... it was about how spending many hours with their human is stressful and hard on horses.  Made a lot of sense.  The example they gave was a weekend warrior, spending all day Saturday with her horse... I'd be pissed off with that woman too!

I know some folks that ride multiple horses in an evening, so the horses get a cursory groom, a ride, a cool out and off they go.  That may actually be a favour to them, not something to worry about. …

Mia Is Not Too Pleased With Me

I finally got to ride on Wednesday, the first time in two weeks.  Between all the extra traveling I’ve had to do, the lingering effects of my MS exacerbation plus an absolutely horrible head cold I was too sick and exhausted to ride last week.

Wednesday dawned bright and cold.  Mia  was NOT happy to be brought in.  I could not really blame her, the wind was from the North and it was bitterly cold.  Debbie groomed her, but I did not rasp down her toes as I was just…

Volunteering 101: Come Get Me.

This week spring hit the Colorado prairie. You can tell because the temperature and the wind speed are the same. Tumble weeds broke into my barn and sure, Edgar…

It's not you. It's me - Self Awareness During Training "He's just resisting everything!" Maddie called to me in frustration as she butchered a shoulder-in at the trot on her gelding, Indy. (Somewhere in the world a French cavalry officer was rolling in his grave.) I said "Bring it down to the walk and let's see what you are doing." Maddie deftly performed a gorgeous shoulder-in at the walk with Indy rocking back on his haunches…

My client’s mare is lovely; a very well-bred athletic horse. When my client bought her, the previous owner suggested my client get a cowboy to ride her at first, she needed spurs all the time and the horse was ‘mare-y‘, whatever that means. I get a little…

The Oakley Diaries - 17: He is a Character

Let's be fair, all horses are characters, if we take the time to get to know them. Everyone who spends lots of time will find amusing quirks and peculiarities and will gather a collection of anecdotes. This horse is okay on the road until he sees a painted bicycle symbol. That one doesn't like potted plants. This one loves dogs, that one hates 'em.

There's a discussion currently going on via Facebook around horse shows, and there are two issues:  lack of horse shows and footing.  The contention being that footing will drive attendance at a given show.  We all have different opinions about what constitutes good footing.  The place that the two big shows in the province are held has footing great for jumping, but, in MY opinion, it is too sticky for dressage, and can be really tough on a young horse.  It's also quite expensive to get the…

The Art is in the Transition.

When I see kids learning to drive these days in compact cars with automatic transmissions, I wonder where’s the challenge? Back in my day, (beware when a gray-haired…

Striking Results From Minimal Use

First, my apologies to my readers for not having a blog for a month.  These first three months of 2014 have been among the most challenging of my life and I have not been able to ride more than once a week, a BIG comedown from three times a week.  Amazingly I have made some progress with the horses with using the Back on Track stuff for just 30-45 minutes a week.

Fortunately, before my life fell apart, I ordered more Back on Track stuff for the horses, the poll cap…

Today I burst into tears at the mere mention of blocking Mr Havoc's leg...

A year and a half ago, his aunt, my Maggie, was lame, and we blocked her leg, without first x-raying, because that's normal, and she broke her leg and had to be put down immediately.

So, the mere thought of doing it with him was more than I could bear.  The x-ray machine wasn't working, and this was the only other thing they could do 'right now' to figure out why he is a bit off.  Luckily, it was the…

Dealing with the what-ifs

This is an approximation of my conversation with my eldest daughter (a beginner rider, 9 years old):

DD1:  What if the horse spooks today when I ride?

Me:  Well, try to focus on sitting deep in the saddle, staying relaxed and being a quiet leader.

Me:  But you didn't yesterday, right?

Me:  Yes, but you might not.  And the horse might not spook, as the snow isn't melting as much today. So the arena's roof…

Well, little Miss Mo went to a little dressage show last weekend.  We schooled at home on Friday and she was awesome, so, it was a good way to start the venture!  She loads like a pro and doesn't get bothered by different stalls, different arenas, people on other horses wandering around...

So, our first test had a bit of speedy bit going on, back to back canter tours just melt her little brain.  Now, we have never stood in a corner to wait for our next test, but she was great about…

Where did I go wrong?

As a girl I dreamed of being a famous horseback rider but my family didn't have the resources to fund that dream. It's a story I know many of you can relate to.

This is my story, a story of a girl who dreamed too much and hoped for too much. A story that you can relate to.

In this day and age where the TV blasts stories of animal cruelty and animal abuse and neglect it is easy to think about those offenders as nameless, faceless monsters. However, they are people.…

First of all, the reason Dressage needs some explaining is that the there are some misconceptions about this riding discipline.

Some people think that Dressage is a hyper-correct, micro-managed, soul-killing, brain-numbing and sit-bone-driving sport with all the drama and thrill of curling. But with less cool outfits: (see…

Will your horse leave his herd to join you? - Win the pony popularity contest 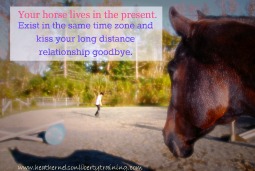 Recently a few people have asked me how to get the focus of a horse in a herd. It’s awesome that your horse has the opportunity to live in a herd! Keep that up. But your path to BFF’s is challenging. Your horse doesn’t seem to need you for companionship. Or do they?

Your task is to become more attractive than the group. More awesome. More wonderful. More rewarding…

As I sit here in my toasty house, it's a balmy -27C (-16F for you holdouts in the states).  Windchill is -40C (-41F).  Of course that's measured up at the airport, not down where my kids and I are, where it's probably a good 10C colder.  It wasn't so a couple days ago, and this is the wonder of living in Alberta... by next Saturday, 13C.  As you can imagine, this tends to cause some issues in one's horse keeping!  My little Mo is clipped and lives outside.  She's a tough old girl, but she's…

Expressing Gratitude (Or Have you Hugged Your Horse Today?)

Both my daughters have started riding recently, and it has been a rewarding and learning process for all of us.

Browsing friends' status entries on Facebook, I've been struck by some friends' effort to find and recognize happiness, as well as expressing gratitude (things like, 100 days of Happiness, etc).

This made me pause to think about finding and expressing happiness, via gratitude, when at the barn.  As such, my daughters and I now take a bit of time, either at the end of…