When teaching a horse to be comfortable around their head, you need to remember two principles of natural horsemanship:

1) The reward is in the release: This means that when you are touching the horse, you
need to make sure you only stop touching when the horse is being
pleasant. If the horse were…

Do You Know What's Hiding in Your Equine Grooming Products?

Do You Know What’s Hiding in Your Equine Grooming Products?

Training Tip of the Week: Get control of the five body parts.

How to Stop a Horse When He's Running Backwards

I was trail riding over the weekend, and my horse took a dislike to the horse behind him. I saw the symptoms (making faces) and tried to get his attention on me, but he would have none of it! That awful equine behind him clearly needed to be taught a lesson (he must have been several feet back). So my horse (an appaloosa) RAN backwards!…

Saddle Fit and the Western Saddle

I have been asked now several times to address the subject of fitting western saddles. As you may know, my specialty is English saddles – and mainly dressage – but for what it’s worth, here are my thoughts on western saddles.

i have been so lucky with my little hano/tb. she is 4 yrs 3 mo now, and has been such a pleasant horse to start. we can go to shows-have been to 5 different facilities-including one that was many hours away. we can also go to the forest for hacks with her mum or on her own, or even... with others-not such a good idea. i mean someone saying that they tend to let their app choose it's own pace, should have warned me- and cantering down a hill is not a good idea. lovely delph though, just kind…

They say life is what happens when you make other plans. (I know...there I go quoting "them" again. One day, I'll figure out who "they" are.) Recently, I heard someone comment that dressage is a metaphor for life. It seems Sammie caught wind of the concept, because my grand plans for Sammie's debut into the local dressage show scene have gone to hell in a handbasket.

At the beginning of the year, I vowed to set the dressage world on fire. My… Continue

i love autumn, but i don't like the lack of light. i was riding a couple of times a week after work, but there were darkening shadows. so i decided to clean stalls in the evening and ride in the morning before work. so far so good, but unfortunately, 5 30 is 5 30, whether you're riding or cleaning stalls.

How Mares, Geldings and Stallions Communicate

Today I would like to talk to you a little about mares, geldings and stallions and how they respond differently when communicating with us.

Mares can be moody. In these periods I find that if I take the time to connect with them slowly in the beginning before riding or training on the days they are moody, they will come around and forget…

Natural Horsemanship Solutions: Bending and Collection - How do I set my horses head?

We often can see rider's setting their horse's heads by pulling the reins back and forth and the horse ends up in a head set, without experiencing true collection.... so how can we get our horses to offer collection and a nice round head set?…

Just Me, My Horse, and My ipod

Saturday morning the girls went to the river to ride again. I had some other obligations and got back to the house just after they left. Ah, this would be a good day for a solo ride. The ipod is loaded up (I even have a "Riding Jessie" playlist) and fully charged.

Once I had Jessie cleaned and tacked we headed out the same we go on about 80% of our rides. It amazes me how the dynamic changes with the number of horses in the ride. As we were alone, everything was especially scary. I… Continue 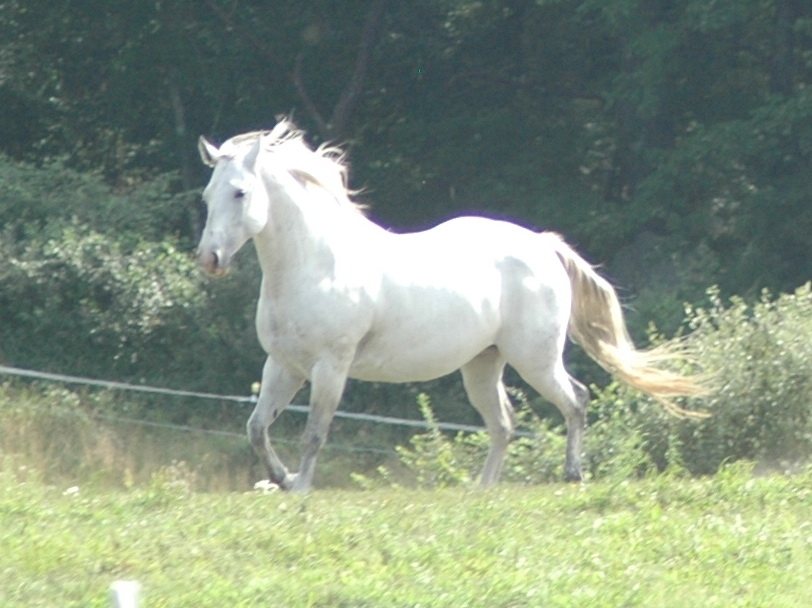 Message from Aidan – the…

April 29, 2003 – Barbaro, the famous Thoroughbred racehorse, was born at Springmint Farm in Nicholasville, Kentucky. His sire was Dynaformer and his dam was La Ville Rouge. He was owned by Roy and Gretchen Jackson. Barbaro was foaled and raised by Bill Sanborn. In 2006 Barbaro would go on to win the Kentucky Derby before breaking his leg in…

A Minor Change of Plans--Bumper Spurs

Last week, with visions of rowel spurs in my head, I went to my "local" tack shop--a 60 mile round trip, and discovered they did not have what I was looking for. There was ONE set of smooth rowel spurs, with the extra long neck, made of zinc of all things but only $10 US so I got them anyway for future experiments if needed. I also found this weird looking set of slip-on spurs, with the "spur" interface being a series of rounded metal curves. This set looked…

Dressage in my state

I would like to start off by saying that I am not a "DQ" (completely)....I am though very strict on my training and horse management as thats how I was trained by some of the best in the World. Coming from a family of Dressage riders and competitors, I am really amazed at how the Dressage community in my area demonstrates 1.sportsmanship 2. horse care 3. training 4. barn…

Riding with a loose rein


I don't know if I have brushed more horses in my barn or in my dreams. I can spend hours just grooming a horse. I think by now I can draw them with my eyes closed just pretending that I am running my hands over their magnificent bodies. Every inch of their bodies memorized in the palms of my hands has forever captured their beauty and by now it has been blueprinted permanently into my imagination.
When my son was training horses with me, I actually spent more time being the groom. I… Continue

Have you ever heard someone say “that was a long spot” or “you really chipped in there?”
Learning to jump takes patience and time, for both you and your horse. Allowing your horse the time to build confidence over fences will ensure he’ll trust you to jump any fence, from any distance, and most importantly, he’ll want to jump for you.

When your horse wants to jump for you,… Continue

So...what's in a by-law, anyway? Apparently, a LOT of legal jargon! Bluebonnet Humane Equine Society (www.bluebonnetequine.org) sent us their by-laws, and Colleen had been preparing some for what would become Borrowed Freedom Equine Therapies (www.borrowedfreedom.org). Still, I had to download forms (thanks, Google!) as to what needed to be in the by-laws, what constitutes a director, how many you need, how you will… Continue 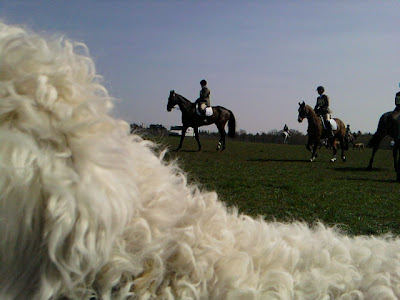 Pic.left: Watching dressage warm up with Barney who after becoming friends with me decided being close by is the way to go!

Tweseldown trip was very interesting. The reason I like to go to various events is because I like to… Continue

Less distractions are better if you can help. If your horse is not listening on the ground first, you may have a problem once you get on. If you are not in the saddle yet, work with your horse on a shorter lead, keep the horse closer to you and try to keep their head towards you or looking where they are going.

Keep sessions short. When asking for something new, and you succeed, make sure you repeat it again before stopping.

Start your next sesssion with what they…