We would like to thank Christilot Boylen for sharing her adventures riding on a special quadrille team for an important horse show this week in Oman.  Oman is a Sultanate on the south east corner of the Arabian Peninsula.  It has a strong and ancient history of equestrian activities and horse breeding.  The current ruler, His Majesty Sultan Qaboos, has promoted modern methods alongside traditional practices of horse-keeping and…

How to Supple Your Dressage Horse's Shoulders

Do you ever feel like your dressage horse's shoulders are so stiff and stuck that not only is it hard to turn him, but his hindquarters are disconnected from his front end?

If your horse’s shoulders are stuck, it’s like having a kink in a water hose. The energy can’t flow from behind, over the back, into your…

Kick Start a Healthy Life – 10 Tips you can Start Today

Kick Start a Healthy Life – 10 Tips you can Start Today

Slice of Life – Photography – will Boost your Business

Everyone know that if you have a business of any kind – you really need to have a web site – it’s almost a pre requisite for business these days.

Your web site not only helps potential clients find you, but also do a little research about your company.

If you are reading this you are well aware that people not only search on line but they also compare.

If you are offering a “service” your potential…

Have you ever wondered why such a big strong animal like a horse would allow us puny humans to ride and dominate them.

Change the Frame of a Horses Mind to Overcome Resistance

The story I’m about to share with you will be practical information for those of you who really know how to use the Waterhole Rituals ™and who have trained a few horses with them. For those of you that haven’t, let it be “food for thought” for the future as you grow as horsemen and women. I want people to think about what is going on in their horse’s mind. No one should try the strategy I am going to share with you unless they…
Continue

My wonderful son asked me last week what I wanted for Christmas, muttering that it was probably too late to order on-line to get something by Christmas.  I went to the wonderful book site (amazon) and found that I could get any amount of horsie books by Christmas, and I asked for "Riding and Schooling Horses" by Harry D. Chamberlin, the Captain of the US Cavalry teams for international competition so long ago.  This book,… 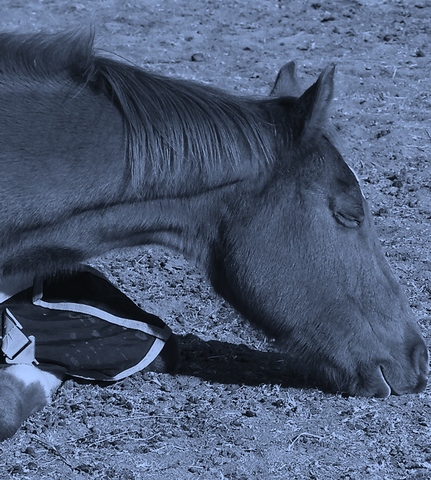 “Good Will to All” -Holliday, Infinity Farm Homeland…

In Beth’s dreams a pony white
Would dance and frolic through the night.
By day into her mind he’d trot
A fancy, floating, fleeting thought.
Sometimes upon his back she’d ride;
Sometimes behind a veil hide
And simply watch him prance and play.
He would be hers, she knew, one day.…

The Duct Tape Approach to Health 
"We bind ourselves together, by taking hold of each other's hands so
firmly and forming a circle so strong that if a tree should fall upon…

Getting a Horse Present and Connected to Overcome Resistance

Last week I gave a lesson to a student of mine, Stephanie, who has a Welsh Cobmare that she has been driving and riding. The horse is very fearful and so shehad started doing the Uberstreichen Exercises and working on getting hercomfortable in her territory.

The problem I noticed with this mare was that although she was doing well withthe Waterhole Rituals™, when she was brought to the barn, she did not want…

Jaimie Holland represented Canada at the sixth annual 2010 FEI Young Rider World Cup Final, which was held at the CDI-W Frankfurt in Germany on December 15-19, 2010.

On the last day of competition, Holland, 21, of Caledon, ON, and her… 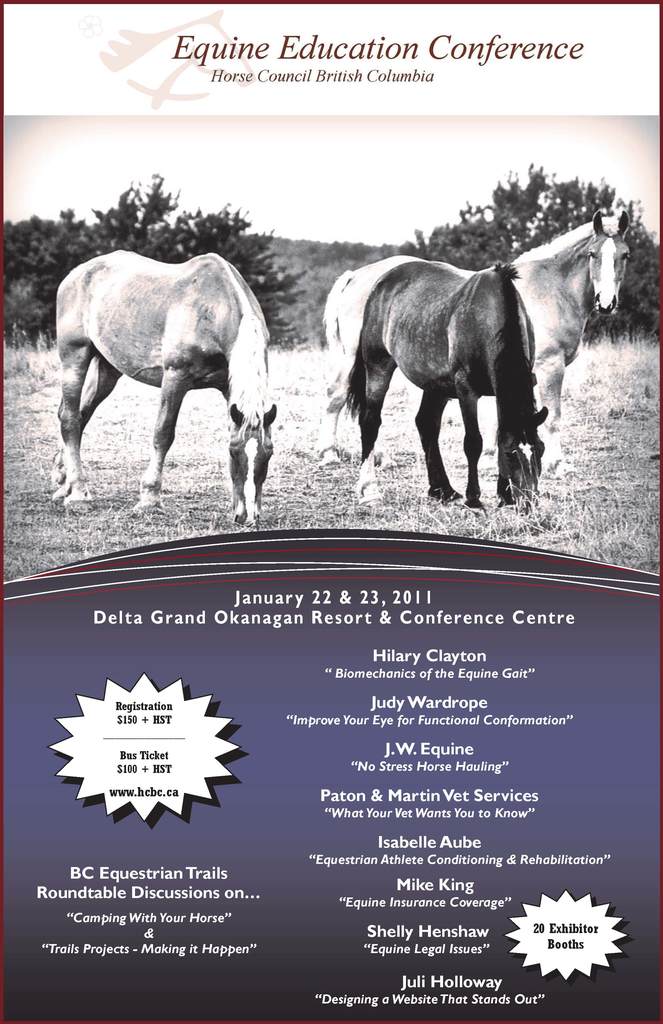 It is with deep regret that Equine Canada (EC) acknowledges the passing of long-time member, coach, official, clinician and mentor, Jacqueline (Jacqui) Oldham, 72, of Langley, BC, after a courageous battle with cancer.

Jacqui was born in Bellevue, AB in 1938 and started riding as a young girl in Edmonton. By the age of 14, Jacqui directed her equestrian interest to dressage leading into a lifelong dedication to the sport.

Jacqueline continued on to accrue over 60 years of…

Is Your Horse a Partner?

Is Your Horse a Partner?

There are many different styles of training and working with horses. Some people fawn over their horses with praise and affection, others take a more military style approach with defined boundaries and little affection, and most people fall somewhere in between.

Natural horsemanship professes a balance of boundaries and praise. Horses that…

Meet Suzanne. An endlessly jolly character who absolutely loves having lessons and learning new things. Suzanne helps out at a riding school by managing the whole operation on Sundays. She pretty much does everything from mucking out to meet & greet, open and close, feeding the ponies and hacking out with clients. In return, she gets the lessons, mostly on a Cleveland Bay mare, Rosie.