As you step into the barn on a crisp spring morning, you are greeted by three nickering equines. You freeze instantly - you have four horses. You rush to the stall thinking: cast? colic? The answer is far worse: stolen.

A close friend of mine went through the horifying experience of having her horse stolen out of her four stall barn. He was annonomously returned six months later with a hairline fracture in his pelvis. Before he was stolen, he was nothing special (except to her, of…

If you have a problem with your horse, he starts acting differently than normal, here are some things to check:

Mares Currently due to foal at Mulligans Run Farm

Mares Currently due to foal at Mulligans Run Farm We currently have four mares on cam #1. On the top left we have Piper. Piper is a fatty even when she's not pregnant. This makes her breathe harder when she's laying down...also giving false impressions of labor. We have tried to get weight off her....she has dropped some, but looks as big as can be carrying this foal. She is due 4/2 but has a full tight bag - the biggest in the barn. On the top Right we have Shanza Blue. Shanza is my favorite… Continue 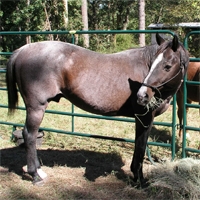 Checklist: Kids who ride horses have the best slumber parties...

A bit off topic, but I thought you guys might enjoy this:

Well the first lesson was a success! My trainer was impressed with my heels staying down and also the rest of my form. I need to work on leaning back while in my canter so it's more smooth but other than that I was pretty good for not having ridden in almost 4 months.

I rode a 30 year old appaloosa named Gogo. (Less emphasis on the go go.) She's a very pretty mare. During the lesson we did sitting trots, posting trots, cantering, and going over a cavalettie. (not sure…

The horses are just going bonkers!

I wouldn't call this a special moment.....but how often do we get such a horrible winter with SO much bloomin snow?? I don't know about you...but it seems the past couple of weeks with the up and down weather, my horse is just plain goofy! One day he'll be wonderful...the next day a total spook freak....to very silly and goofy... jumping everything like it's 4 ft high (although I must admit it is fun). They must be getting sick of looking at 4 walls by now and must be itching to be ridden…

Ever wondered about Horse Statues?

Someone sent me an email that said...

If a statue of a person in the park on a horse has both front legs in the air, the person died in battle.…

I finally found a barn that looks very good and professional. I'll finally get to start jumping and I'm very excited to trail ride! I've never done it before but I'm sure its a blast! I get to start my first lesson on Friday after school. The first few lessons will be pricate so mt trainer can get a bearing on what I can do, and then i'll get to ride with some girls my age. She has some beautiful appaloosa's and a few quarter horses. My trainer has been riding almost all her life…