Happy Birthday dear Aries.Last year started with you going for it in your career, this trend continued for all, or most of last year, where you focused mainly on your career. You experimented with different aspects of dealing with your horse, and sometimes you felt almost as if you had a grasp on everything, so you began to coast for awhile.This year your focus will change as you have achieved most, or all of your goals.You do have many interesting feats…

An Important Blog about (not) Advertising in our Blogs! :)

A few recent posts have prompted me to add this note reminding everyone that there is no advertising or advertorial allowed in our Blog section - or any other member content section of Barnmice. Any posts that we consider commercial will be deleted.

Teaching Your Horse to Jump - The Correct Approach from Day One

Let's spend some time developing the correct technique and right jumping habits from the very beginning...

When you are ready to start jumping your horse, the first thing you must do is work out a way of getting the him to the fence so that he can jump it correctly.

Presenting your horse appropriately is the only way to help the horse improve his jump.

I surprise you, having said in earlier posts that canter should be a horse’s preferred pace, but I aIways…

Destroy Fear with an Attitude of Gratitude

It's completely reasonable that occasionally you'll be afraid when you ride. After all, you're dealing with a reactive (reactive means bolt, spin, buck, shy, or rear!) animal that outweighs you by a lot! But you can destroy those fears by adopting an attitude of gratitude.

The first thing you need to remember is that ninety-nine percent of the things you fear never come to pass. So why waste all that energy worrying about things that will probably never happen.…

I’m often asked about my thoughts regarding the paradox of a rider or horse owner/enthusiast trying to develop a true bond with a horse while the horse is in a boarding stable and therefore primarily "in the care" of others.

This Will Rogers quote makes me chuckle! "There are three kinds of men. The one that learns by reading. The few who learn by observation. The rest of them have to pee on the electric fence for themselves."

The painting accompanying the quote is one of my favorites of my three Quarter Horses, DJ, Echo and Ollie. Ironically, the three were recent escapees from my electric fence enclosed mini pasture. Yes, a neighbor rang my door bell the…

Thank you for taking a moment to read this post! In addition to all of my regular horsey activities, I am in the fortunate position of being able to research the equine industry in Ontario right now. As part of this project, I have developed an on-line survey that is open to anyone involved in the Ontario equine industry. You can be involved in any capacity; an owner, a casual rider, an active competitor, an 'equine-related' business owner, farrier, trainer, etc. Any…

Just wanted to say how much I appreciated your comments regarding my position on my horse. I have tried a number of your suggestions and feel that they have definitely helped. Clearly, you spent a lot of time analyzing my leg position and the problems I mentioned about leaning too far to the right side. I also have gone to your site and it is very helpful. I would highly recommend anyone wishing to get some helpful hints to contact you.

Thanks so much for…

One of the discussion topics in the past week on this site has been around the problem of legs creeping forward when you ride. From what I see in clinics, this problem spans disciplines- it doesn't seem to matter whether you're in an English or Western saddle. Getting that heel more aligned under your hips is a challenge.

If you look at the past three weeks' worth of Ride Better/Ride Fit! blogs, each of the three riders in the examples also shared this problem.

Horse of the Year

Well, it's over for another year...

HOY is the biggest equestrian event in the southern hemisphere, and a great sprawling beast of a show. It runs from Tuesday to Sunday, and includes show jumping, dressage, show hunter, saddle hunter, driving, breed classes, mounted games (eek!), ponies, hacks, small children dressed up like little dolls on exquisite little ponies wearing more make up than Paris Hilton, led by Mums who look like they are going to a wedding. This year there was…

Big Girls I need your help!

I hope I'm not infringing rules here; I need help and this is the best place I know to find it!
my Company, Fuller Fillies has been designing and manufacturing for the UK plus-sized horse riding fraternity (can't spell the female equivalent) for three years; we have just launched in the USA, Canada, Germany, Holland & Sweden and realise that preferenced differ greatly!
I need to gather statistics, likes and dislikes, wants etc and would be delighted if all your Barnmice could…

Well the foal didn't make it. Found it dead in the middle of the stall on Monday morning. Further inquiry to foaling farm found out that he had had some seizures during the first couple of weeks of life. They hadn't seen any recent ones when he was sent to me at 3 weeks of age. I don't think he would have ever been right - certainly not right enough to race. The mare knew something was wrong and was solictious of human help with the foal.

Knock on wood the bad streak is over and…

In Part 3 of Flatwork for Jumping, we take a look at flying changes.

Before any of my young horses go to a show, I teach them how to do a flying change. In training sessions I teach them that when they change the rein in canter they automatically change the canter lead.

It is important that the horse learns to change the sequence of legs and keep himself balanced. You’ve probably all read the books on the aids to use, but my horses can’t read so I like to use a simple…

"Act as if what you do makes a difference. It does."

We all make a difference in the lives of others. William James' quote, "Act as if what you do makes a difference. It does." points out the fact that our actions can and do make a difference. A smile can brighten a stranger's day. A random act of kindness can bring encouragement to others. Sharing a moment with someone you care about can be the lift that they need.

If your actions make a difference, what actions will you consciously… 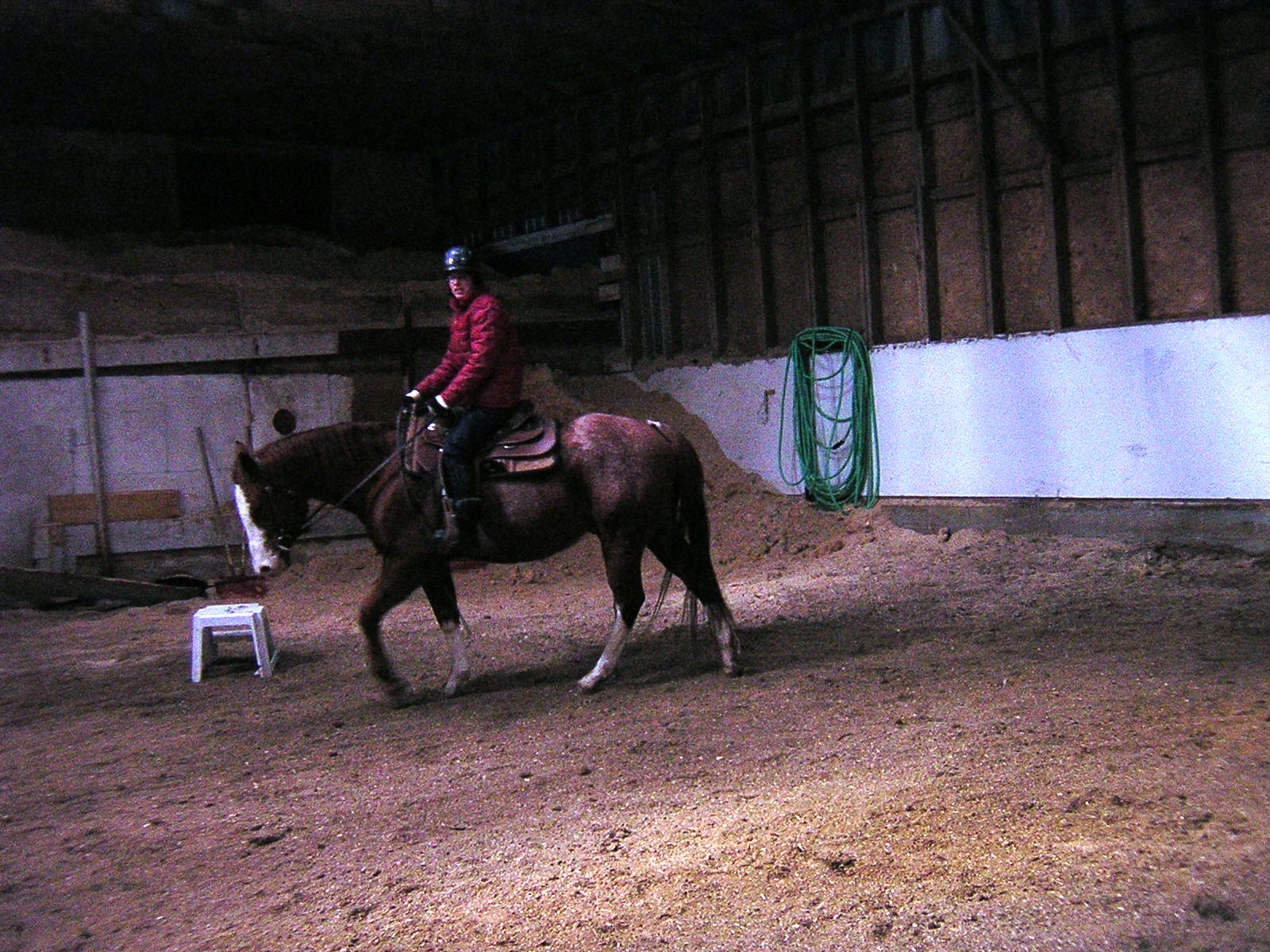 Hello, It's great to see how many people are practicing some off-horse fitness activity during the week to help their riding. You've posted some encouraging comments. If you recognize yourself in some of the photo examples- that's great! Don't be shy about sending in your photos or posting some video footage of your ride. I won't be analysing your riding overall...just providing feedback on things you can…

Can HOW you apply for a job affect the employers decision about your application? Take a look at these examples and YOU decide.

(1) EMAILS
Based on first impressions alone, who would you rather hire for a job? Someone with the email address Lazeeee_Ass@email.com or showgroom@email.com?
OK, I can hear you laughing and I know that you know someone with a "questionable email address", just remember this, your email might be cute to your friends and…

We had a great show on the weekend of March 13-15 in Del Mar at the Dressage Affaire. We started off on Friday with the Junior Team Test. We had practiced hard for the last two weeks after the last show and I hoped all the hard work would pay off. Chance is only seven and is still green with the changes but he went out there and tried his best. This was only our second qualifier and our first CDI ever so I was amazed when they anounced that our score was a 64.054%! With a judging panel…

I have to pinch myself; I'm going to Sydney CDI - with a horse this time! It's an awesome opportunity to really make an impression over there, and one that I honestly didn't think I'd get, as we have not been so consistent this season.

It's a costly exercise, flying a horse to Aussie for (hopefully) 3 tests, so I'm getting my act together to do serious preparation, and get my trainer to come over. No-one else knows how to get us both firing like "Uncle Bill" does.…

Well I've been sick with a cold since I got back from the AERC Convention. Only since yesterday have I finally quit coughing! Haven't felt much like riding or long lining after work, so the poor beastlies have been sitting idle again.

Yesterday had to go lift a sick foal at work for 4 hours till the weekend staff figured out how to do it properly without harming the foal and making sure it nursed and urinated when up.

Today headed up to the Centre Wellington Tack Swap…