Designs for your Favorite OTTB

Thanks to Natalie Keller Reinert and her wonderful blog Retired Racehorse I stumbled upon these wonderful saddle pads!  You can proudly display your horse is an OTTB every time you ride!  I ordered the white one and can't wait to get it!  I am hoping that they do other colors and keep adding to the collection.  They also will donate $5 to an OTTB charity.  Be sure to check them out!…

I hope everyone had a wonderful and merry Christmas!  Taylor definitely was a good boy as Santa left him a stocking full of treats and not coal!  (I guess he forgave the couple of times he's tried to kick me recently-ha!).  I have spent a lot of time bonding with Taylor...a LOT.  Before I started his training, I spent my time grooming him and sitting with him.  I still love it when we have the chance to just hang out together.  With that said, he can read me.  Somehow he just knows when I…

I brought Taylor to his new home at the end of June.  I am boarding him at a stable that has rolling hills, a nearby lake, and a pasture in a valley.  It's a beautiful place!

Let's just say Taylor was not impressed in the beginning.  In fact, he was mad at me.  This summer has been brutally hot, and Taylor is not one that really enjoys the heat.  He is the horse you will always find in the shade, if he can find a patch.  Unfortunately, his transition pen at his new home didn't have…

Taylor had been at Race Horse Reclaim Thoroughbred Rescue for a little over six months when I decided he was the one.  I had been volunteering for a few months so I was getting to know the horses and like any normal horse lover I loved them all.  However, my heart belonged to Taylor for he picked me as much as I picked him.  The first day I was there volunteering I was standing next to his pen watching…

There is nothing in this world like a horse excited to see you.

Those two ears pricked forward right at you.  A soft nicker of greeting.  A velvet muzzle thrust into your hands.  For me, these small actions just make my heart swell with joy and love.  I love to walk toward my OTTB (off-track Thoroughbred) and watch those ears prick forward and his head raise.  I'm sure he knows there will be a treat involved at some point but I'm going to say it's all…

This is a former post on my blog:  Hoofbeats Return

Sorry I have been bad about blogging recently, but I have had a lot going on.  The most important of which was my recent adoption of an exracehorse named Taylor.  Talk about falling in love!  It may really have been a classic example of love at first sight.  I volunteer at an exracehorse rescue…

I recently received an email from a friend that contained some "rules" her horse has enforced. I enjoyed reading these so much I decided to share them. I know each horse has their own personality and may come up with their own rules for us, but there are some that will be the same across the board. These may fall into that category. I hope you enjoy them and feel free to post some of yours in the comments section!

Rules Horses Teach Us (According to Grace):

Winter doldrums: I’m dragging my feet all the way in from the arena, the ground is dry, the grass is dead and the wind is cold as a slap in the face. Maybe I have an Auld Lang Syne hangover. Mourning and a desire to hibernate go hand in hand in January. It seems we lose alot of…

Another fun night in the arena

I started my session with Cole, last night, with lounging.  I am trying to teach him the verbal command for canter.  Last year, we avoided the canter because of all the bucking, bolting and rearing I was getting.  This year, I just really want to get him to canter.  Well, after all the bucking, bolting and rearing, he settled down enough to get clickable transitions.  I don’t think he is getting the word, quite yet, but we are doing better.  If he is in one of his power trots, he has a hard…

The stall next to me wasn’t empty for long. A day or two after the Spanish horses left for their new home in Nova Scotia (see November 9th post), Louis, our Canadian horse, appeared next door. He likes to live outside in the big pasture, so I hadn’t seen him for a while. He was looking exceptionally grumpy.

“Merde,” I heard him curse under his breath. He was avoiding me, trying to get to the far  side of his stall, but every time he put his…

Cole was doing his dance as soon as I got him in the arena.  We practiced it as I led him around, but then it was time to work.  My goal was to further strengthen his corners.  You see, on one end of the arena, there are no walls.  There is the viewing room, the shavings pile, the barn exit and none of it is in a direct line.  We have to make the corners on our own.  I suppose he wasn’t doing them well, all along, but when I started to practice laterals, he tried all kinds of things on those…

Today it is not surprising that online education is becoming more frequently the common medium of information dissemination. For just about every topic, it seems as though there is a webinar or teleseminar that one can register for easily, and attend from the comfort of one’s couch. However, it is a bit surprising that something as experiential as equine therapy can be taught via the internet, yet it is most certainly true.

So just what is taught…

I practiced Cole Train’s dance moves on Friday, and he was getting very consistent with higher steps.  I wanted to show my sister when she came out on Saturday.  She was very impressed, and of course he made her laugh.  Sunday, he started doing it when I led him into the indoor arena!  Yes, Cole likes this game.  I did some clicking with him for the dancing, then mounted to ride.  My sister was there, again, and to stay warm, she suggested she walk with us as we warmed up at the walk.  Even…

Competition Outside the Ring 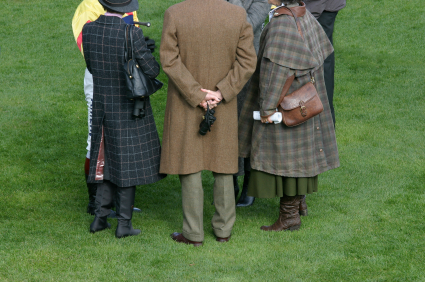 Sometimes there’s more competition that goes on outside the show ring than inside, don’t you think?

Back mover versus leg mover

No one can say they cannot see the difference now.

Here is a good example of a leg mover in Totilas..... http://youtu.be/mrRgNuYJLAY

Here is a good example of a back mover in Design....…

A Song and My Very Own Chestnut Mare When I first heard this song by Marie-Lynn Hammond, I found there was so much I could relate to that I contacted her to let her know how much I enjoyed the song. I have had my very own chestnut mare for 13 years now – and enjoyed every minute of…

Story time: Tell us about what you did for the difficult to catch, the horse that either refused to go or refused to slow down.

I want to hear you stories, and share some of my own.  Tell me about the one that got away, didn't take a step no matter what you did, or wouldn't slow down long enough to get anything done.

For our difficult to catch we had a myriad of Galicenos that had been raised with minimal human contact after the first year. They were all halter broke, some lead broke, but still very wild.  Of these we had a pair of full brothers, 8yo Flash and 6yo Peanut Butter.  Both sons of El Cacahuatito…

After so many years of riding, seeing beautiful scenery, sharing with terrific friends/riding buddies and most always forgetting to take a camera it's been brought to my attention to get a HelmetCam.  I know nothing about these and wondering if any of you might have some experience and knowledge to share.  Thanks.

I notice that no one is asking me for beauty tips.

I have been blogging along for a couple of years now and I notice that no one is asking me for beauty tips. I wonder why that is?

It couldn’t be that I offended with last week’s rant about non-helmet wearing riders who have more concern about their hair than their brains.

It can’t be a grudge about the blog where I referred to my truck as The Perfect Purse, that was…

Equine Therapy: Preparation is 90% of Success

Dust settled as the leather fringe of well worn chaps flung in the wind and the young cowboy pulled his horse to a quick stop. Then, clutching his reins in frustration, he looked up at the sky and shook his head. His horse had taken the wrong lead...again. (The horse’s lead describes the leg he leads off of when cantering. For example to canter to the right, the horse must be on the right lead, and the left lead to go left. When on the incorrect lead,…