End of week 1 in Germany

This week has been hard work! I am glad it is the weekend and we get a bit of a break, although we still had to ride once yesterday and do barn duty this morning, which is okay because the rest of the weekend is fun!

Yesterday (Saturday) after our riding and lungeing lesson we went back to Stall Ramsbrock, i rode the same young horse as last time, and then we went to the second property of Heinrich Ramsbrock which was where all of the foals and broodmares were kept and it… Continue

Hope this Helps Someone - Lyme Disease/Leptospirosis in Horses

Hello everyone,
I am posting this to put the information out there; I searched and searched to find out what was wrong with my horses

I wish I had known about this disease 1 1/2 years ago, that was when Patina, Finn and Tucker, my horses first started to be ill with unexplained sore feet, muscle loss and muscle tenderness, clicking joints, and general dullness. Tucker actually died, in spite of vets.

Moving to France with 4 horses a dog and a cat.

Hi folks, thought I'd have a go at this blogging and tell you about my move from the UK to France. This is not fiction.

OK, there was me, Nick my man, Luther, Patina, Finn and Tucker the horses, Katie the dog and Jasmin the cat, it was actually Jasmin's home she, part of the landlords household.

However her cat lodgic impelled her to move in with us.

Home for us humans, dog and cat was an unsatisfactory caravan secreted in an unusual place.

This could be fun...

So I've never really consistently kept a blog before, and those that I did write up were done years ago. This could be fun for kind of keeping track of what is going on with the horses I ride, the barn life and all that, though!

So I'm riding for a sales barn right now in Puslinch, Ontario. It operates out of Amarna Farms and we've got everything from super green ponies to that easy 3'6" hunter. As of right now I've got a few that I am working and showing to clients, and as of…

Wow i still can't get over how awsome it is over here! Not only are the horses amazing, but the whole atmosphere of the town and people is so comfortable and you feel so at home.

Well the days at the Equestrian Centre are long and hard. We have to be at the barn by 7.30 to do barn duty or to get your horse ready for a dressage lesson, and when you aren't riding you are preparing or putting away your horse or watchhing lessons and studying the theory out of The Principles of…

Wow so much has happened already! Yesterday we met nearly everybody who was doing the course at the State Equestrian Centre, and they are mostly americans who are really nice! Alex Wortman, the Chief Instructor, is such a great guy who is so funny, and so is his wife.

This morning we went to Stall Ramsbrock, which is home to 1400 horses and the owner is the world champion in breeding. We got to ride, and i rode 3 horses. the last two were only 5 months under saddle, and the other 2,… Continue

From out of nowhere came another lady, this one all the way from Florida, who spent all weekend in the pasture with her, no petting, just talking, and who started working on the human trust issues. Jolee turned in her adoption application after that first weekend and flew in almost every weekend after that, slowly gaining Naysa's shattered trust. Before long we started seeing pictures of Jolee sitting in the pasture, Naysa inches away, listening, or Jolee and Naysa sleeping together in the… Continue

Habitat for Horses received the call from Louisiana on Thursday, June 7 2007 about an injured mare in desperate need of special care. She had been dragged behind a trailer and badly hurt.As the trip started Saturday further details came trickling in. When found the mare was wearing a halter wrapped in barbed wire. She also had a hole than ran straight through her nose all the way through her sinus cavity presumably from impact with the trailer and of course her hooves had been worn down by the… Continue

World No.2 showjumper pulls out of Olympics

Irish showjumper and world ranked number two rider Jessica Kurten has announced that she is not available for Olympic selection.

She told media yesterday that her horse, Quibell, was a bad flyer and conditions in Hong Kong might not suit the horse, who was currently out for possibly six weeks with an injury. Another of Kurten's top horses and a top Olympic hope, Castle Forbes Maike, has recently been sold. And she said that Castle Forbes Libertina had had a busy indoor season and… 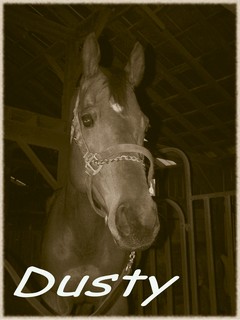 I always wanted a horse for all life...and finally when I gave up hope I got two magnificent horses and new trainers and LOTS of new friends! Thanks Grandma Donna! Love Sierra… 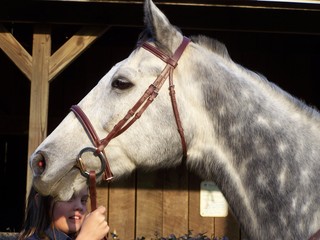 pretty horse song i heard from the movie Flicka

okay, now dont say its gay cuz when u sing it its REALLY pretty. so, here goes nothin,

okay, so its a lulaby, but its prettiful, well, i think so.

Do you think the Judges are being harder?

I was at a show last weekend. It was the hottest weekend in CA this year. There has been some complaining about how hard the judges where. I know there where a lot of low scores. But as I watched some rides they seem to right on. I know my horse was a little flat. He did have lack impulsion. My scores seem to be that same as other shows I have been to this year. Have you all noticed a change in the judging this year? Do you think it is because of this rule change?

Sports drinks are expensive. If you would rather make your own, dissolve a tablespoon of sugar and a pinch of salt in a tablespoon of orange juice or in 2 tablespoons of lemon juice and add 7.5 ounces of cold water. This mix has all the benefits of a sports drink.

Looking for a Pro Groom for 5 Dreesage Horses for Korean Client residing in the USA, Horses only compete at CDI Level, Person must be fluent in Englisch , must have drivers License and be experienced as a Groom. Opening immediatly, all cost will be taken care of for flight, Visa, Housing, Tarnsportation - THIS IS A LONG TERM EMPLOYMENT - not just for 2-3 month - please conatct Katja Eilers at katja@katjaeilers.net

No time is wasted when it is spent on the back of a horse!!(a small Horse) 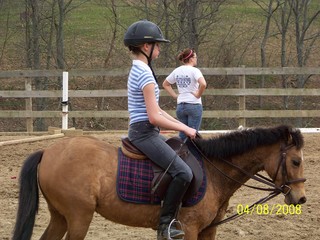 Separating Yourself From Your Own Fear

For anyone who has been following Dr. Karen Sharf's advice on Healthy Rider, she has a great video on leaving your fear at home. What you may not know is Dr. Karen has helped me enormously in dealing with my own fears. Here's how it worked for me.

Dr. Karen first suggested to me that I start by giving my fear a name. I named it "Blob." Not very interesting, but there it is. Then she asked me to come with an image of what my anxiety looked like - short or tall, what
color, etc.… Continue


TheStar.com | Horse Racing | Battle to save horses from slaughterhouse


Battle to save horses from…